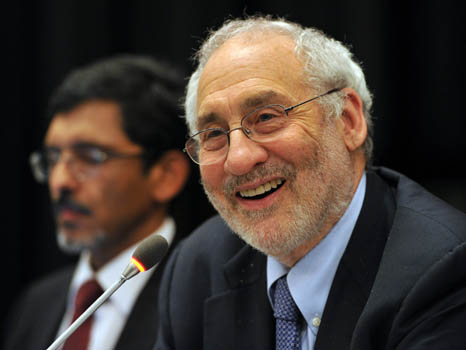 In a column on Project Syndicate Stiglitz commented on the recent book by French economist Thomas Piketty Capital in the Twenty-First Century, which explored the dynamics behind rising inequality.

After discussing the book, Stiglitz said, “What we have been observing – wage stagnation and rising inequality, even as wealth increases – does not reflect the workings of a normal market economy, but of what I call ersatz capitalism.

“The problem may not be with how markets should or do work, but with our political system, which has failed to ensure that markets are competitive, and has designed rules that sustain distorted markets in which corporations and the rich can (and unfortunately do) exploit everyone else.

“High levels of economic inequality in countries such as the US and, increasingly, those that have followed its economic model, lead to political inequality. In such a system, opportunities for economic advancement become unequal as well, reinforcing low levels of social mobility.”

The Nobel laureate noted that market rules are established through the political system, and that these have recently been inadequate, leading to an increasingly unequal society.

However, he wrote that game rules can and should be changed – for instance by introducing simple measures such as capital gains and inheritance taxes, enforcement of antitrust laws, corporate-governance reforms and greater spending to broaden access to education.

Stiglitz added, “If we get the rules of the game right, we might even be able to restore the rapid and shared economic growth that characterised the middle-class societies of the mid-twentieth century.

In May, the Henry Jackson Society hosted a conference in London about inclusive capitalism, where various leading figures including Price Charles, governor of the Bank of England Mark Carney and director of the International Monetary Fund (IMF) Christine Lagarde, spoke about the need for a change in the prevailing system to tackle inequality and restore sustainable growth.