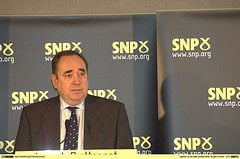 The first minister for Scotland has this week unveiled a new local energy challenge fund available to community partners, in order to promote low carbon initiatives.

Hopeful candidates for the fund will have to outbid other community partnerships in order to gain access to the fund, proving their projects are the most profitable to the community in promoting renewable energy and low carbon developments.

Salmond has described the fund as a move to reshape Scotland as a global leader in renewable energy by reshaping how that energy is delivered and used in communities throughout the nation.

From this week, community groups, charities, local authorities, housing associations, universities and businesses can apply for the fund through the Community and Renewable Energy Scheme (CARES) Local Energy Challenge Fund.

Ahead of next month’s referendum on the Scottish independence vote, speaking in Arbroath, Salmond said, “Today, my cabinet colleagues and I will undertake a series of visits in Arbroath, seeing first hand some of the great success stories of the Scottish economy.

“This is a confident Scotland, building on its strengths and ready to be a successful independent nation.”

WWF Scotland director Lang Banks added, “If Scotland is to meet its climate and renewables ambitions then it’s vital that as many people and organisations are supported to play their part as is possible”

“Across Scotland many small businesses, public bodies and communities are already taking steps to save energy and plug into clean renewables. This fund should allow many more to lower their carbon emissions in the future.”

The forthcoming independence vote is arguably beneficial for the renewable energy sector in Scotland, as it acts as a useful catalyst for better strategic planning within the industry, Richard Essex, an independent financial adviser, has argued.