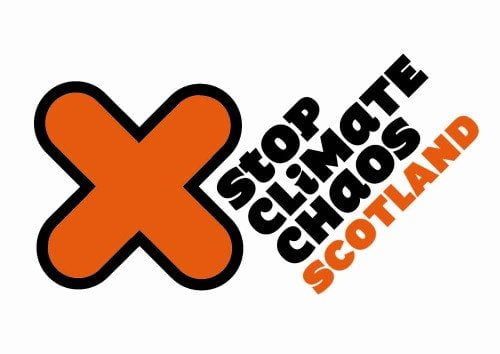 Campaigners are getting on their bikes to call on politicians to deliver climate action in advance of this year’s Holyrood elections. A team of cyclists from Stop Climate Chaos Scotland rode around Edinburgh today (Thurs 4 Feb), delivering the campaign’s Scottish Parliament manifesto to the five parties currently represented in the Scottish Parliament. The team delivered copies to the offices of the Scottish Conservatives, the Scottish Greens, Scottish Labour, the Scottish Liberal Democrats, and the Scottish National Party.

Stop Climate Chaos Scotland is the biggest civil society coalition in Scotland, and works to ensure Scotland plays its fair part in tackling climate change and meets its legal targets to reduce carbon emissions by 42% by 2020 and 80% by 2050.

Cyclist and Stop Climate Chaos Scotland campaigner Jim Densham said: “People in this country want change. Communities across Scotland are coming together to create their own clean energy, to build green transport systems, and to adopt low carbon lifestyles. Before the UN climate talks in Paris, thousands of us marched in Edinburgh as part of a global movement for real climate action. Now is the time for the political parties to match that commitment and enthusiasm.

“During the last Scottish Parliament, we repeatedly failed to meet our climate targets. That simply can’t continue.”

“The policies set out in our manifesto are reasonable and achievable, and will take us towards a new clean, green economy with benefits for all of us.

“We need warm, energy efficient homes. We need a meaningful shift away from investment in private cars, and towards investment in public transport and active travel like walking and cycling. And we need the Scottish Parliament to use its new tax powers to help cut climate emissions, especially when it comes to Air Passenger Duty.”

Stop Climate Chaos Scotland had originally planned this event for last Thursday but it had to be cancelled due to severe bad weather from Storm Gertrude.

“We weren’t immune to the exceptionally bad weather many Scots have been experiencing recently and last week it wasn’t safe for us to be out in the strong winds. Climate scientists have linked the changing weather patterns to climate change, and these links are becoming clearer.

“People are also making the connections and with more flooding and increasing storms predicted for Scotland and the UK we want to see urgent action from political parties of all stripes.”

Stop Climate Chaos Scotland has also launched an online campaign at stopclimatechaos.org/election-2016, asking members of the public to write to the political parties, urging them to support policies that will secure a low carbon Scotland by 2020.