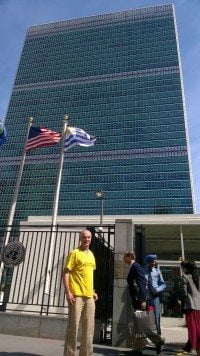 Chippenham-based renewable energy firm Good Energy has joined climate experts to welcome the signing of a global agreement on climate change by over 150 countries, including the UK.

The agreement, which sets out measures to limit the global temperature rise to no more than 2°C, was reached in Paris last December. World leaders are expected to attend the ceremony at the United Nations in New York today to formalise their support.

“World leaders are making a huge promise in New York to take action against climate change. We can all do something to drastically cut our reliance on fossil fuels, with the switch to renewable energy across the world now having a clear pathway.

“Emissions from energy are one of the biggest causes of global warming, and the simplest way to cut your footprint is switching to renewable electricity and carbon neutral gas.

“Climate change is the fight of our time. World temperatures are on an upward trajectory year on year, and we need to find a way to decarbonise our economies and lifestyles, if we are to live in a future world that we recognise. Switching to renewable energy and green gas is one of the simplest and easiest ways to achieve this.”

Professor Joanna D. Haigh, Co-Director of the Grantham Institute on Climate Change and the Environment at Imperial College London said:

“The Paris climate conference was an historic event in achieving the unanimous agreement of 195 countries that we need to reduce greenhouse gas emissions. To have any chance of limiting global temperature rise to less than the 2°C agreed to represent a dangerous level we need to replace fossil fuels by low, or preferably zero, carbon sources as soon as possible. One way in which people can contribute to this is by switching to renewable energy suppliers.”

Good Energy launched a carbon neutral gas tariff to celebrate the signing of the agreement last week. The new gas tariff, partly made up from biomethane – or ‘green gas’ – is designed to make it easy for energy customers to take action against climate change.