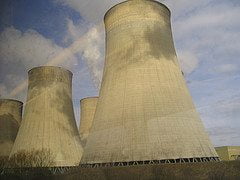 The Labour party has pledged to mobilise investment in the development of carbon capture and storage technology (CCS) if it wins the next general election.

In a policy position paper published on Wednesday, Labour says that the technology – which has yet to be proven at a commercial scale – is “a necessity, not an option” in the rush to decarbonize the UK’s energy sector.

Installed at a fossil fuel power plant, CCS technology would capture carbon emissions at the source, and allow them to be stored safely underground. It is thought that the UK’s depleted oil and gas fields in the North Sea represent ample storage space.

In theory, this would allow the continued use of some fossil fuels without further contributing to climate change.

It has been estimated that CCS could even reduce the cost of meeting national decarbonisation targets by as much as £30-£40 billion by 2050, while boosting the economy by £5-9.5 billion per year.

The policy paper therefore puts forward a range of policy options to support the fledgling CCS sector, and invites responses from businesses, investors and NGOs.

These include a system of grant funding, a feed-in-tariff for CCS users, or an amendment to the Renewable Heat Incentive.

Labour also suggests that the government-owned Green Investment Bank could play a greater role by supporting investment when CCS projects are finally ready.

“The Labour Party wants to decarbonise the power sector in ways that play to our strengths and minimise costs,” said shadow energy and climate change secretary Caroline Flint.

“Whilst we will place strict demands on the industry to deliver value for money, the potential is there for the UK to lead Europe in the commercialisation of CCS, particularly for industrial applications.

“The Labour party is clear – as we shift to a low carbon economy, CCS is a necessity, not an option.”

In a recent report, MPs on the cross party Energy and Climate Change Committee urged the government to fast-track investment decisions on the UK’s two pilot CCS projects.

Urgency is now required because the government’s bungled efforts to kick-start CCS with a £1 billion competition in 2007 led to nothing, after the two previous awardees of funding terminated their projects at the turn of the decade, the MPs said.

In order to cut emissions by the 2020s, when the committee says such savings will be needed, the report urges the government to make final funding decisions on the projects, one at Peterhead in Scotland and one at Drax in Yorkshire, before the next general election.

“These two demonstration projects will not be enough to kick-start the industry or have a significant impact on our carbon budgets, however, ministers must also ensure that viable CCS projects not involved in the competition are able to apply for guaranteed-price contracts alongside other low-carbon energy schemes.”

While it still awaits a decision from the government, Yorkshire’s ‘White Rose’ project – which will combine an existing coal-fired power station in Selby with a transportation network across Yorkshire and the Humber – has since received €300 million (£238m) in funding from the EU.