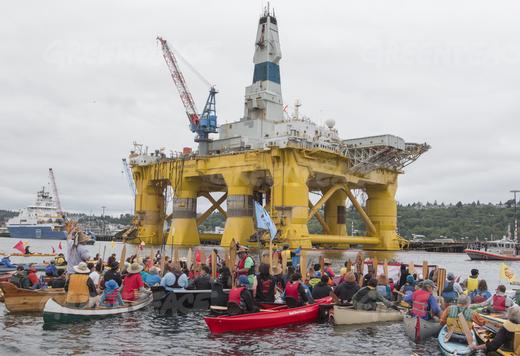 Hundreds of people took to the water off Seattle near Shell’s Polar Pioneer drilling rig with kayaks and canoes to say no to recently approved plans to resume dangerous search for oil in Arctic waters.

The ‘sHell No’ protest saw hundreds on kayaks, canoes and paddleboards on Sunday standing next to the Shell’s Polar Pioneer drilling rig. Many held flags and signs calling for climate action.

Last week, President Obama gave his approval for the oil giant to go ahead with Arctic drilling , provided “rigorous safety standards” are met.

Shell had pulled out of its plans in 2013 amid safety concerns and decision to review whether its equipment was suitable for the operations.

Environmental groups have argued the area should not be touched by drilling operations and that Shell is not to be trusted on environmental regulations.

Greenpeace spokesperson Travis Nichols said, “It’s clear President Obama has heard the chorus of boos greeting his approval of Shell’s summer Arctic plans. He knows his climate legacy is at risk in the Arctic this summer, but instead of stopping Shell from drilling, he’s defending the company.

“If, as the President says, Shell has learned from its mistakes, why did it fail its first coast guard inspection last month? Why haven’t we seen the results of the third party audits Obama’s own administration asked for after the 2012 fiasco? There are very easy ways to prove Shell has learned something from its mistakes, but no one in the Obama administration is holding the company accountable.”

The Dutch company says exploiting Arctic resources is crucial to secure energy supplies for the future. However, many from campaigners, scientists and politicians have warned the region is extremely fragile and already under pressure from melting ice caused by global warming.