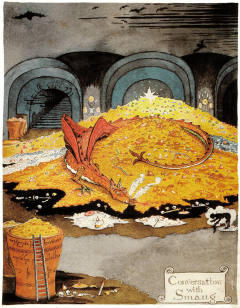 A new anti-fracking campaign within the SNP is launched today.  SNP Members Against Unconventional Oil and Gas (SMAUG) was formed following an activist meeting at the weekend.

On the 12th of September, concerned grassroots members of the SNP from across Scotland met in Leith to hear and discuss expert evidence on the climate change impacts and public health risks posed by the extraction of unconventional oil and gas reserves.  At this meeting, in the best traditions of the SNP, a decision was made to form a members’ group that would advocate against the exploitation of these deposits.

Currently, a moratorium exists in Scotland temporarily halting onshore fracking and the extraction of coal-bed methane and a vote will be held at next month’s SNP conference calling for this to be extended to include underground coal gasification.  We have therefore set ourselves the short term goal of  influencing this decision and strengthening the moratorium and the longer term goal of seeing Scotland join countries such as the Netherlands, Germany, France and  Bulgaria and the state of New York, in banning the extraction of these dirty, dangerous, hydrocarbons.

The members present at the meeting were a mixture of long term supporters and those who joined in the wake of the inclusive, energizing Yes campaign.  We are all united in our belief in the SNP’s commitment to creating a social just, fair, prosperous and greener Scotland and believe the goals of this group are an important part of helping achieving these aims.

We are proud of the SNP’s history in leading the world by setting tough carbon reduction targets.  We believe that exploiting these deposits is entirely at odds with the overwhelming scientific consensus on the need for significant carbon pollution reductions if we, as part of the global community, are to help halt dangerous climate change. At a community level, we also believe the evidence is clear that the techniques used cause significant local environmental and public health damage.  Indeed, how could pumping into the earth under our communities, 100,000’s of litres of water laced with grade one carcinogens such as benzine or the endocrine disruptor boric acid, not damage our waterways, our land and our health?

We look forward to contributing to the debate within the party which will no doubt be held in typical SNP fashion – open, inclusive, perhaps forthright, but ultimately democratic and empowering.  In the coming weeks we will be inviting SNP members, branches and constituency associations to join our group first by liking our Facebook page and later by online membership sign up.

Iain Black, Forth branch, said:  “Scotland already has more oil and gas than it can burn if we are going to halt damaging climate change. We can burn North sea gas or we can burn gas from fracking but we can’t burn both.  Why would we choose the one that pollutes our waterways, damages the earth under our homes and damages our health and damages our food and drinks industry?”

Diane Burn, Edinburgh Eastern, said: “The SNP government are focussed on delivering a fairer, more prosperous and equal Scotland.  They have committed as part of their Climate Change Act to invest in the renewables sector and have recently launched both the Land Reform and Community Empowerment bills.  I believe that another essential part of the SNP’s achieving its aims is to move away from the UK policies on fossil fuels and concentrate on how, for example housing development, industrial estates and communities could generate their own power therefore reducing fuel costs as well as help to ensure their Climate change targets are being met.”

“We struggled to find an acronym for the group out of an unlikely set of letters’”, said Catherine Shea (Leith) “but I was very happy when Iain suggested SMAUG.  It recalls  Tolkien’s dragon living in the depths of the earth and being disturbed by the predatory dwarves going digging for the treasures of its domain. This SMAUG is awakening to save us from the confused priorities that lead us to damage the very resources that we need to live – our land, our air, our water – and to protect the wee inhabitants of Middle Earth from the long blight of falling house prices and stasis in. or reversal of, plans for regeneration.  Once UCG licences are granted, the companies often do nothing for years, but the impact on land values and community well-being is immediate and devastating.”

Reacting to news that a new anti-fracking campaign has been launched within the SNP in the run up to the party’s autumn conference, Ms Flick Monk, Unconventional Gas Campaigner at Friends of the Earth Scotland said: “This new SNP anti-fracking campaign is a very welcome development and shows the great levels of opposition to unconventional gas among party branches and grassroots members. It is clear that local communities do not want their health and environment damaged by energy companies aiming to extract gas at any cost.

“The Scottish Government has taken an evidence-based approach to unconventional gas through declaring a moratorium on coal-bed methane and fracking. But with mounting  evidence from around the world showing that fracking, coal-bed methane and underground coal gasification pose huge risks for human health, the environment and the climate, it is time the Scottish Government stops this dirty industry from getting its foot in the door while it still can. The party conference provides a timely opportunity for the SNP leadership to listen to its grassroots members who are strongly opposed to energy policy that is risky, short-sighted and unsustainable.

“Also up for debate at the party conference is whether underground coal gasification should be included in the current moratorium on unconventional gas. We urge all SNP members to vote to put a halt to the very risky plans to set fire to undersea coal seams that would threaten people, wildlife and local economies in the Forth and the Solway.”