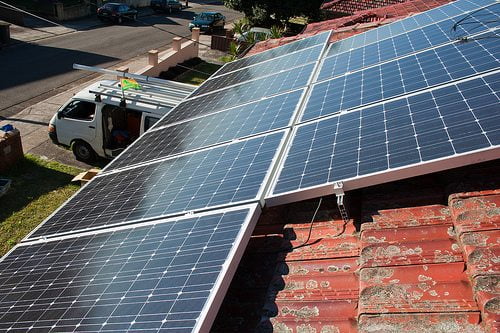 Plymouth’s first solar share scheme gives investors a chance to take a stake in renewable energy developments in the area. The announcement came just weeks after the city was affected by storms and flooding.

The Plymouth Energy Community (PEC), which was established in 2013, is a members co-operative run by local people. The initiative gives local residents an opportunity to invest in and transform their power generation. Twenty sites across Plymouth have been selected to have solar panels installed to create green sources of electricity.

The panels will help cut energy bills and carbon emissions. Surplus electricity will also be sold back to suppliers as part of the government’s feed-in tariff and enable the PEC to pay interest to shareholders.

Local councillor Mark Lowry said, “This is a pioneering and innovative scheme with many benefits and Plymouth is leading the way.

“Not only will the scheme pay out interest every year to its shareholders of up to 6%, which will generate an income, it also provides tax relief under the national Enterprise Investment Scheme. This is a great opportunity for local residents and businesses to invest in the city.”

Shares in the scheme cost £1 with a minimum investment of £50 – up to a maximum of £20,000. Plymouth city council is providing an initial loan of £500,000 from its investment fund to help get the scheme off the ground.

Dave Garland, founder member and director of PEC, commented, “Generating renewable energy through solar panels is really exciting for Plymouth and for PEC. This is the third initiative to have launched since the creation of the co-operative and it really shows that Plymouth is thinking outside of the box.”

Giving local residents the opportunity to become owners of their own clean power generation was described as “more important than ever” by Julia Groves, managing director of investment platform Trillion Fund.