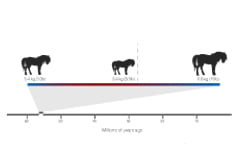 Research from eight American institutions led by the University of Florida and University of Michigan, has discovered a correlation between temperature and body size in mammals.

Taking a short (no pun intended) period of global warming, an American research team has investigated how mammals responded to increased temperatures. The scientists found a thought-provoking link between increasing global temperature and decreasing body size in “horses” that trotted the earth some 56 million years ago.

The tiny horses of the period were unrecognisable from today’s beasts and about the size of a small dog. Jonathan Bloch, co-author of the report, said, “What’s surprising is that after they first appeared, they then became even smaller and then dramatically increased in size, and that exactly corresponds to the global warming event, followed by cooling”.

But is there any evidence to suggest the trend could also affect people? “I joke about this all the time – we’re going to be walking around three feet tall if we keep going the way we’re going”, says Philip Gingerich, a researcher from the University of Michigan. He added, “If that’s the worst [global warming] gets, it will be fine.

“You can either adapt, or you go extinct, or you can move, and there’s not a lot of place to move to anymore, so I think it’s a matter of adaptation and becoming smaller”.

All whimsicality aside, we do need to tackle climate change and strive for a low carbon economy – a message expounded by Lord Stern this week.

Global warming may seem like an insurmountable problem, but you can Make a Difference by thinking more carefully about where you invest your money, who supplies your energy, how you travel and what you buy.