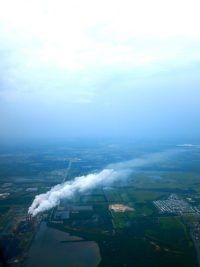 Cleaner air to be delivered by Brussels deal

An important piece of legislation that looks to cut air pollution across Europe by 2030 has been agreed in an EU deal this week.

A revision of the EU National Emissions Ceiling Directive was agreed on yesterday, creating binding reduction targets for all member states, including the UK.

ClientEarth lawyer Alan Andrews said: “The EU has taken a crucial step forward in the fight for clean air. By cutting emissions of air pollution across Europe, this law will halve the number of early deaths from air pollution by 2030.

“These negotiations have perfectly demonstrated the importance of Britain’s membership of the EU. Air pollution knows no borders so cleaning up Britain’s air can only be achieved through cooperation with our neighbours.

“Three British MEPs, from across the political spectrum – Julie Girling, Seb Dance and Catherine Bearder – have perfectly embodied this spirit of cooperation, working tirelessly in Brussels to secure a healthier future for people in Britain and the rest of Europe.

“Sadly, the British Government did not demonstrate the same level of commitment, choosing to protect the polluters rather than the people who elected them, and so the UK’s targets are not as ambitious as they should be. However, in return for agreeing to these targets, Britain has ensured that 27 other countries will also cut their emissions.

“In a future outside the EU, we will lose influence over these kinds of laws, and risk a return to our historical role as the dirty old man of Europe.

“That is why ClientEarth will be working to ensure that the UK remains legally bound to meet these targets whatever its future relationship with the EU.”