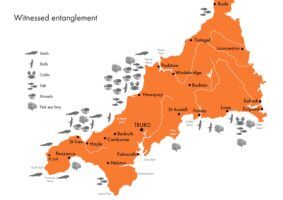 World Animal Protection UK have commissioned the first ever assessment of the affects that ghost fishing gear is having on the coastline of Cornwall and threat it poses to marine life.

A key finding of the research is that when interaction and entanglement risks were combined, 26% of all ghost gear items recorded posed a serious threat to marine animals.

Abandoned and lost fishing gear, known as ghost gear, encompasses lines, nets, pots and ropes which are a huge threat to marine animals and coastal wildlife. Entanglement in ghost fishing gear causes huge suffering to animals and in many cases leads to a painful death. Ghost gear is known to travel long distances along ocean currents, with lost gear from the USA and Newfoundland being spotted on beaches across the UK.

A total of 4226 new ghost gear items were recorded by volunteers on land and by World Animal Protection funded boat-based surveys during the 12 month study period, amounting to 49,917 litres or 51 tonnes from 147 different locations. 30 tonnes can equate to the size of a 45ft sperm whale. The researchers were able to remove 14 tonnes of ghost gear during their research, reducing the immediate risk to marine animals in the area, particularly to seals (risk dropped from 47% to 24%).

The work was undertaken by Cornwall Seal Group Research Trust to support World Animal Protection’s Sea Change campaign and explored the severity of the ghost gear problem in Cornwall by looking at:

The research is a snapshot of the problem in UK waters and World Animal Protection are hoping this research inspires other researchers to undertake similar projects in their regions to build a more accurate global picture of the issue.

Risks to animals from all new ghost gear recorded

Ghost gear directly affected 52 individual creatures from at least 12 different species which were recorded as entangled.

Data was collected between November 2014 and October 2015, along Cornwall’s entire coastline.

For each boat survey approximately 3000 photographs were taken and each item of ghost gear seen either in the field or from photos was recorded. Data included the number of ghost gear items, the type of ghost gear (for example buoys, floats, line, monofilament net, pots, rope, rubber or other), the length and/or volume of the material, whether the item had been previously reported and if it was removed.

A total of 1398 ‘new’ ghost gear items were recorded. This amounted to 19560 litres or 20 tonnes from 46 locations across the Cornwall coastline. On average this amounted to 26 new items a week, over the course of the year.

A total of 360 surveys recorded 2828 ghost gear items were recorded by volunteers amounting to 30,352 litres or 30 tonnes from 147 different locations. This represented 54 new items being washed in each week.

Ghost gear is a trans-boundary problem, and it’s essential that efforts to address it are undertaken collaboratively across countries.

“While this research was being conducted we saw lobster pot tags travelling 3,000 miles from Newfoundland to Shetland and pieces of gear hitching a ride on the Gulf Stream from Canada to Cornwall but the lack of research meant finding the right solutions was a real challenge. Ghost gear is a trans-boundary problem, and it’s essential that efforts to address it are undertaken collaboratively across countries. We hope this study can be used as a model for other researchers to get a better idea of the impact of ghost gear in different regions.”

“CSGRT were delighted with the huge effort volunteers contributed to this project. They were motivated by our desire to collect data and knowing that their information would be shared with World Animal Protection who would publicise this issue across a wide international audience enabling cross boundary solutions to be found. We all want to make a difference to reduce the suffering we witnessed during the project as along with partner organisations we rescued a live entangled sea bird being buffeted by waves whilst trapped in a gill net as well as rescuing entangled seals, one of which was choking itself as the net dragged under its body on a beach. We learned that even removing a small looped bit of net can save a marine creatures life and that together we can actually make a difference.”

Reference materials: Case summary of report and graphics illustrating the presence of varying ghost gear along the coastline. Please request the full report if required from: sarahdickinson@worldanimalprotection.org.uk 020 7239 0632 / 07814 695 298