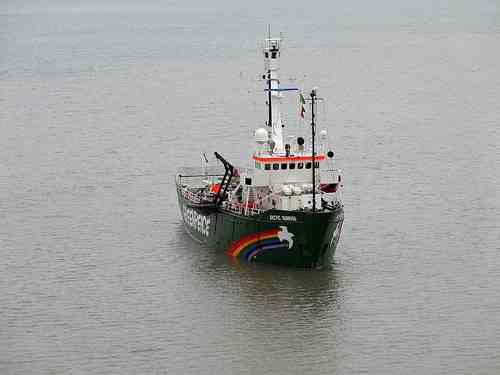 Twenty-five Greenpeace activists are being held at gunpoint after a protest in Russia. The country’s coastguard boarded the activists’ ship in the Barents Sea, as campaigners were planning to hijack a Gazprom oil rig to stop it from drilling.

The siege comes after Greenpeace activists climbed the Shard in London in July to protest against the oil extraction in the Arctic. The 25 activists, including six Britons, are being held on their ship, the Arctic Sunrise, by armed Russian guards during another Arctic drilling protest.

The green group has said that at the time of the incident, their ship was circling Gazprom’s Prirazlomnaya platform from international waters. However, the Russian coastguard’s boarding occurred within the country’s exclusive economic zone (EEZ), which Greenpeace says makes the protest “illegal”.

Greenpeace International executive director Kumi Naidoo said, “This illegal boarding of a peaceful protest ship highlights the extreme lengths that the Russian government will go to to keep Gazprom dangerous Arctic drilling away from public scrutiny.

“We ask President Putin to restrain the coastguard and order them to holster their guns and withdraw. We are a peaceful organisation and our protest has done nothing to warrant this level of aggression.”

Greenpeace has rejected such claims. Ben Ayliffe, head of Greenpeace International’s Arctic oil campaign commented, “The coastguard has boarded our vessels with guns, threatened our activists at gunpoint and fired 11 warning shots across our ship, so who is the real threat to safety here?”

He added, “Drilling for oil here in the Arctic is a grave environmental risk that must be stopped and this is why Greenpeace International came here, taking peaceful action to defend the environment on behalf of the millions of people around the world who are opposed to drilling operations.”