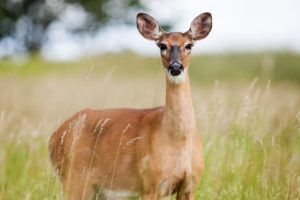 The environmental importance of reducing meat consumption is filtering through in the mainstream media. Knepp Castle provides a beacon of how farming can change if people are willing to embrace the transition

Walking along a rough track dug out by off-road vehicles, dense shrub either side, game eyes weighing me up from a safe distance, I could have been in the savannahs of Africa. Could have, but wasn’t. I was in the wilds of West Sussex.

Knepp Castle Estate has been transformed, or rewilded to be precise, from a standard – and environmentally nightmarish – intensive farm to a unique sanctuary for fauna and flora.  Deer, flowers, pig, trees, cattle, pony, rabbit, hare, owl, bat, birds of prey and much more are flourishing.    Whilst freely strolling around the 3,500 acres you are transported back to a time when animals were abundant in our countryside and able to coexist with humans and agriculture.  Sadly, it is a unique experience in England and I thoroughly recommend a visit.

The rewilding recipe is simple; remove fences, reintroduce herbivores, allow natural grazing, provide a little bit of cultivation, a dash of herbicides, a pinch of wild flow seeds and let nature take over. The recipe provides a platform for nature to reinvigorate itself and the result is an abundance of wildlife that simply could not be created by humans.

From a business perspective it seems to stack up. Produce is sold at a premium due to the quality and origin. There is a fantastic campsite (where I pitched up) in a wildflower meadow and some luxurious glamping accommodation, both with access to the onsite shop which sells local produce including meat from the Estate. A separate safari business provides guided tours around the Estate with specialist photography versions available. It is also an ideal research base for those looking to study the behaviour of ecosystems left to their own devices.

The bulk of conservation in the UK is a fallacy; the question of what is actually being conserved needs to be asked. More often than not a state of land – overgrazed, barren and lifeless – which has already been blighted by humans is the gold standard. In a very good talk George Monboit addressed the National Parks Conference on this very issue. For my money re-wilding is the way forward, not the glorified preservation of an already sad state of affairs. It is like restoring a 16th century church in art deco style; it doesn’t matter how nice the G Plan altar is.

The recipe at Knepp Castle is close, so very close, to perfect. It is agonisingly only one ingredient away. The trouble is what happens to all the herbivores? They are in this green wonderland of food, so they eat and eat. They then reproduce and consume even more. The wonderland becomes overgrazed, turns less green and less flourishing, like most of the UK’s National Parks. Not only the herbivores but the wider ecosystem suffers.

Paul Lister has a dream to re-introduce apex predators – previously native bears, wolves and lynx – at his Alladale Wilderness Reserve in Scotland. That is the missing ingredient. Food webs not only work from the bottom up, as my recollection of school biology dictates, but the presence of predators also creates trophic cascades down. The presence of top carnivores changes the dynamics of each food level below, which in turn has knock on effects.

The re-introduction of wolves has had a transformative impact in Yellowstone National Park. One simple illustration; once reintroduced wolves hunt elk, this changes the elks behaviour, they stop grazing in certain areas allowing trees and plants to grow, the increased vegetation then allows other animals like otters and birds to prosper. American wolf hunter Aldo Leopold first acknowledged such relationships in his brilliant 1954 essay ‘Thinking like a Mountain’.

In the absence of predators, grazing is bound to be a key issue at Knepp Castle. There is never going to be a natural balance of herbivores, meaning human intervention is needed to estimate the correct levels.  This also creates an interesting contrast, at Knepp Castle animals are raised and culled in order to create and protect the ecosystem, in stark comparison with the bulk of modern farming in which animals are raised and culled in spite of the damage caused to the ecosystem. The implications of this difference are huge.

The re-introduction of predators ignites a primitive excitement and would be brilliant to see but as it stands currently Knepp Castle is a fantastic project. The environmental importance of reducing meat consumption is filtering through in the mainstream media and I deem the arguments incredibly strong. Knepp Castle provides a beacon of how farming can change if people are willing to embrace the transition. Settled down for dinner in my tent, after a long cycle down to West Sussex and a walk around the Estate, the venison steak from the farm was mouth watering. My first piece of meat in two years; I find the case compelling.