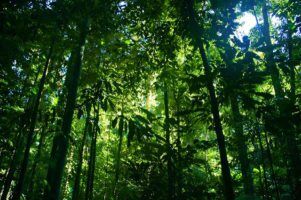 Risk Of Losing Rainforests If Communities Not Protected

There is a growing consensus that securing the rights of indigenous people and other local communities is one of the most effective and sustainable ways to conserve habitats such as rainforests and wildlife. This has been increasingly reflected in international conservation policy and law since the World Parks Congress in 2003.

However, despite billions of dollars having been poured into protected areas over this period, and in spite of legally binding commitments to respect peoples’ rights, there is evidence that local indigenous and local communities across the world continue to pay a heavy price for protected areas that are often imposed on their ancestral lands without their consent.

An investigation published by RFUK in April found that the ‘conservation vs. people’ approach to protecting wildlife has worsened the lives of thousands of native people in Africa’s Congo Basin rainforests. Evidence was found of forced displacement, a systematic lack of respect for communities’ right to consultation about the designation of protected areas on their lands, absence of means for them to participate in or benefit from such areas, gross human rights violations at the hands of ‘ecoguards’, and the progressive destruction of often very poor peoples’ meagre livelihoods. There is also very little evidence that it has saved much rainforest.

Simon Counsell, Executive Director of RFUK, said that “A people-friendly paradigm for conservation hasn’t materialised for millions of forest dwellers living in and around protected areas and who continue to face real hardships in the name of conservation. Not only is this unjust and ultimately unsustainable, but it marginalises the very people who have protected forests for millennia and who represent one of our best hopes for doing so in the future”.

The situation in the Congo Basin is extreme but symptomatic of conservation practice in tropical forests elsewhere, and other ecosystems, which is all too often based on the wrongly-held assumption that these areas are wildernesses free of long-term human influence and traditional management. The resulting strict prohibition of subsistence hunting and fishing, and increased militarisation of protected areas in recent years, has not stopped the tide of illegal poaching but is having profound impacts on those that live in and depend on the forest.

Mr Counsell continued “As conservation policy makers and donors meet in Hawaii, it is now time for them to back-up the rhetoric with action. Necessary measures would include a commitment to rectify past injustices, including through compensation and restitution of indigenous peoples’ lands, more systematic monitoring of the effectiveness of strictly protected areas, and a switch to funding of sustainable conservation which has local peoples’ involvement and benefit at its heart. ”

A short film about forest communities affected by the Tumba Lediima Reserve in the Democratic Republic of Congo (DRC) is available here.