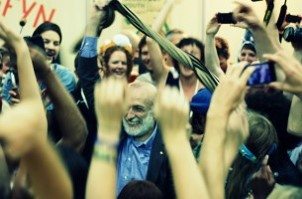 Slow Food has: “said it from the beginning: Expo 2015 was only ever going to be an interlude for us [Slow Food], six months of a different kind of activity, in a new context. The 2015 Universal Exposition in Milan aimed and succeeded in attracting millions of people and putting food at the center of the world’s attention.

“We wanted to bring all of our themes to Expo, as well as our answer to the question How to feed the planet, knowing full well that we were not going to be the only ones to do so, and that the solutions from others would be very different from ours.

“We wanted to reach a wide and perhaps less-well-informed audience. We managed to do this, also thanks to the collaboration of Herzog & De Meuron, the architects who designed the Slow Food pavilion, giving a concrete form to our message and turning it an oasis of peace in the middle of the flurry.

“The Save Biodiversity, Save the Planet exhibition aimed to stimulate reflection on the ills of the modern food system and possible alternatives. The public responded, hanging thousands of messages of appreciation to the Tree of Food, demonstrating the great need for genuine information.

“The Slow Food Garden was our main educational tool: not only a picturesque space, but an opportunity for school groups and adults to learn about plant varieties and seasons, as well as the chance to taste authentic flavors.

“We strove daily to give a voice to the many food producers, those who were the real protagonists of this Expo, organizing more than 700 events (available on our calendar) which took place in our theater. The climax was Terra Madre Giovani, the event that brought more than 2,500 young farmers, producers, students and activists from 45 countries to Milan, who “invaded” Expo with their ideas for the future. ”

Nino Pascale, President of Slow Food Italy, said: “We want to conclude Expo 2015 by saying tomorrow we begin. Slow Food has dealt with the topic Feeding the Planet long before Expo began (in 2016 we will celebrate Slow Food Italy’s 30th anniversary), and we will carry on doing so long after the Rho arena closes its doors. The discussion on how to feed our planet with dignity cannot end here: the global population is growing and the impact of the food system on the environment, health and justice is increasingly unsustainable.”

– We are currently involved in the organization of Indigenous Terra Madre in Shillong, India (November 3 to 8); the School Gardens Festival in 500 Italian schools (November 11); and the Slow Food Asia Pacific Festival in Kintex, South Korea (November 18 to 22).

– We will participate in the action day in view of the United Nations Climate Change Conference in Paris, with the aim of making a political contribution.

– We are continuing to work on our 10,000 Gardens in Africa project, which today counts nearly 2,000 gardens in 34 countries.

– We have established the Biodiversity Monitor and have so far cataloged 2673 Ark of Taste products at risk of extinction.

– We are carrying forward the battles to stop soil consumption, propose a definitive ban on GMOs and to stop the TTIP (Transatlantic Trade and Investment Partnership).

More information about Slow Food at Expo 2015 is available here.