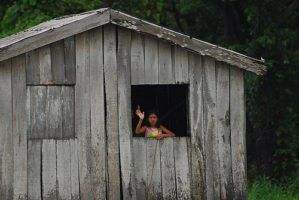 Greenpeace International is supporting the Munduruku Indigenous People to fight a mega-dam on their lands. Bunny McDiarmid, Executive Director, is in the Amazon basin.

Bunny McDiarmid joins the Munduruku community this week as the global campaign to stop the São Luiz do Tapajós (SLT) mega-dam swells to more than one million people globally. The SLT hydropower project would destroy the livelihoods of the Munduruku People and create a reservoir almost the size of New York City in the heart of the Amazon (729 km²).

Today more than one million people are standing with them.

“This shows the enormous support people around the world have for the Munduruku fight to stop the dam and protect the forest,” McDiarmid continued.

Maria Niceia Akay Munduruku, one of the first female chiefs of the Munduruku People, said “The river is our blood. Not only mine, but ours. The river wants to stay alive.” She continued, “The dam threatens everything, not only the Indigenous People. The animals – the birds, the fish, the turtles – are affected as well. They don’t know what’s coming to kill them. The dam will kill everything – the river, the fish and the forest. This is why the Munduruku People are against this dam.”

McDiarmid joined the caciques(chiefs) of the Munduruku to bear witness to the destruction caused by nearby dam sites in an overflight of the areas and joined the team currently working to demarcate Munduruku territory in the Sawré Muybu Indigenous Land.

The self-demarcation of Munduruku traditional lands is one of several collaborations between the Munduruku and Greenpeace in Sawré Muybu. Greenpeace and the Munduruku are holding workshops to build solar lamps and ovens, and installing solar panels in the community centers of two Munduruku villages to demonstrate how renewable energy sources like solar can provide energy solutions.

In addition to supporting the rights of the Munduruku to protect their land from the SLT dam, Greenpeace is demanding the few multinational corporations that could supply technology for the dam publicly commit not to participate in the project. Companies like Siemens, which was involved in the destructive Belo Monte dam, need to recognise the environmental, social and human rights impacts of the SLT dam and refuse to become involved.