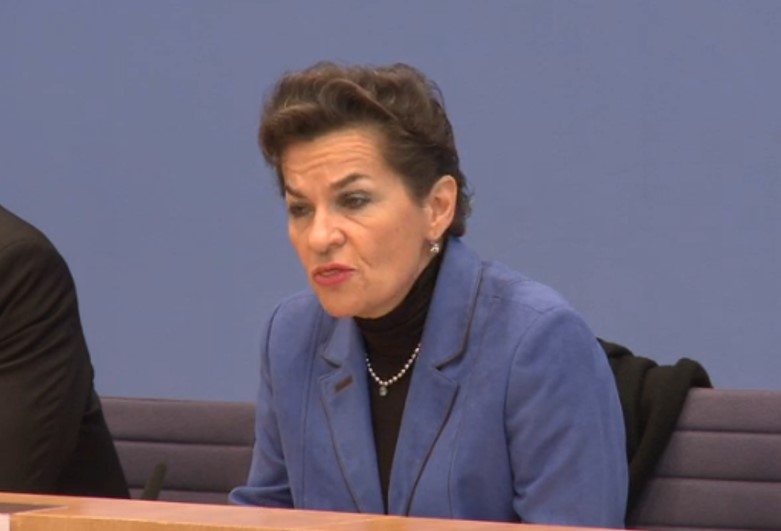 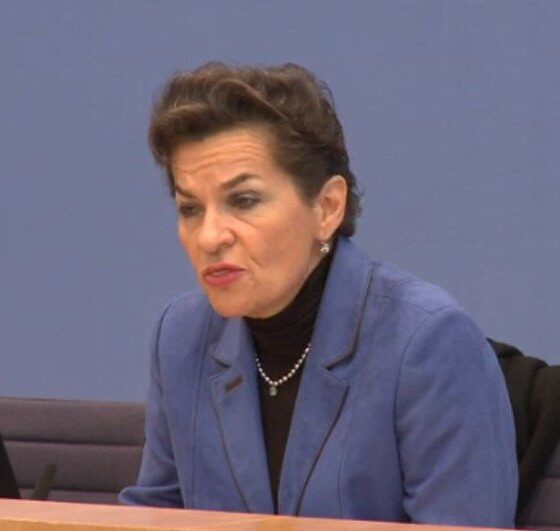 An unprecedented world-wide effort is underway to combat climate change, building confidence that nations can cost effectively meet their stated objective of keeping a global temperature rise to under 2 degree C.

A report released today by the UNFCCC secretariat, assessing the collective impact of over 140 national climate action plans, indicates that together they can dramatically slow global emissions into the atmosphere. Another key finding is that the aggregate impact of the “Intended Nationally Determined Contributions” (INDCs) will lead to a fall in per capita emissions over the coming 15 years.

The final full document “Synthesis report on the aggregate effect of the intended nationally determined contributions” can be accessed here. The report along with all other related documents and information can be found on the UNFCCC website Synthesis Report page.  The conclusion of the UN Report Synthesizes National Climate Plans from 146 Countries represents the: “first deliverable of COP21.”

“These INDCs–or national climate action plans–represent a clear and determined down-payment on a new era of climate ambition from the global community of nations. Governments from all corners of the Earth have signalled through their INDCs that they are determined to play their part according to their national circumstances and capabilities,” said Christiana Figueres, Executive Secretary of the UN Framework Convention on Climate Change (UNFCCC).

“Fully implemented these plans together begin to make a significant dent in the growth of greenhouse gas emissions: as a floor they provide a foundation upon which ever higher ambition can be built. I am confident that these INDCs are not the final word in what countries are ready to do and achieve over time–the journey to a climate safe-future is underway and the Paris agreement to be inked in Paris can confirm, and catalyze that transition,” she added.

Today’s report captures the overall impact of national climate plans covering 146 countries as of 1 October 2015. This comprises 119 separate INDCs from 147 Parties to the UNFCCC, including the EU, a single Party representing 28 countries. Since then, more INDCs have been submitted and submissions are likely to continue.

The 146 plans include all developed nations and three quarters of developing countries under the UNFCCC, covering 86% of global greenhouse gas emissions – almost four times the level of the first commitment period of the Kyoto Protocol, the world’s first international emission reduction treaty that required emissions cuts from industrialized countries.

“The INDCs have the capability of limiting the forecast temperature rise to around 2.7 degrees Celsius by 2100, by no means enough but a lot lower than the estimated four, five, or more degrees of warming projected by many prior to the INDCs,” said Ms. Figueres.

The secretariat report does not directly assess implications for temperature change by the end of the century under the INDCs because information on emissions beyond 2030 is required. However, other independent analyses have, based on a range of assumptions, methodologies and data sources, attempted to estimate the impact of the INDCs on temperature leading to a range of average estimates below, at or above 3 degrees C. Importantly all deliver more or less similar emission levels in 2025 and 2030 and all confirm that the INDCs, if fully implemented, are an important advance on previous scenarios.

“These plans set a determined course, clearly recognizing that successful climate action achieves not only low emissions but a host of other economic and social benefits for governments, citizens and business,” said Ms. Figueres.

“Backed by financial support for developing countries, a clear long term destination of climate neutrality in the second half of the century and a ratcheting up of ambition in a structured, transparent and timely way, the INDCs provide an inspiring part of what will become the Paris package,” she said. 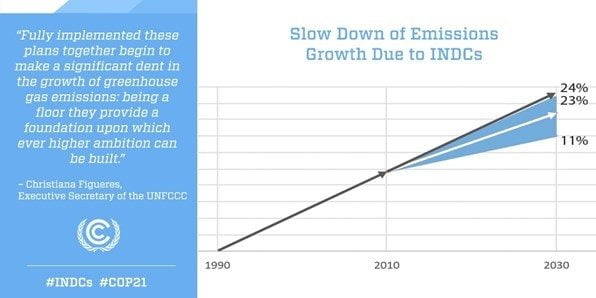 – The majority of INDCs are national in scope and some include immediate action, underlining government recognition of the urgency to raise ambition before as well as after 2020, when the new climate change agreement takes effect.

– The report shows that the INDCs represent a substantial slowdown in emissions growth achieved in a cost effective way, making it still possible and affordable by 2030 to stay below a 2 degree temperature rise.

– As well as the impact on per capita emissions, the report shows that INDCs are expected to slow emissions growth by approximately a third for 2010–2030 compared to the period 1990–2010, delivering emission reductions of around 4Gt by 2030 compared to pre-INDC scenarios.

– All industrialized country INDCs and many developing country INDCs are unconditional. Conditional contributions represent about 25% of the total range of emission reductions.

They reflect growing government confidence in the global response by tens of thousands of companies and investors and thousands of mayors and regional governments who see their own sustainable futures built upon this transformation.

An accompanying report to be published in November from the UNFCCC secretariat – “Climate Action Now” a Summary for Policymakers – will underline the enormous emission reduction potential and multiple economic benefits possible from best practise climate policies across major sectors from energy to transport, from buildings to forests.

Over half of all INDCs also include a long-term perspective on the transition toward economic growth based on low-emission, high resilience development. Many foresee near climate neutrality by 2050, meaning a point where remaining human emissions are absorbed by natural systems, are stored or used.

Implementation of the INDCs will also underwrite the achievements of the new Sustainable Development Goals (SDGs). Indeed, fulfilling these INDCs will be a defining factor in the success of the SDGs which would not survive a future of extreme climate impacts.

Reflecting the need to factor existing climate change into national planning, 100 of the INDCs include measures to reduce vulnerability and build resilience. Countries with an adaptation component in their INDCS are pursuing efforts through a number of instruments, including climate change laws and regulations and national or sector plans and strategies. Sectors of highest concern are water resources, agriculture, health, ecosystems, and forestry.

The new climate change agreement to be agreed in Paris can anchor the INDCs in terms of recognition, accountability and adequate support that will encourage the extra, required ambition to emerge.  And because greater action will be required over time, it is important to note that the INDCs do not indicate any locking in of the level of global emissions in 2030. Many nations will overachieve on goals set based on what is seen as achievable today.

National contributions can be adjusted upwards over time, especially as mobilization of climate finance and other forms of multilateral cooperation which are catalysed by the new Paris agreement will allow governments to go further and faster, even before 2030.