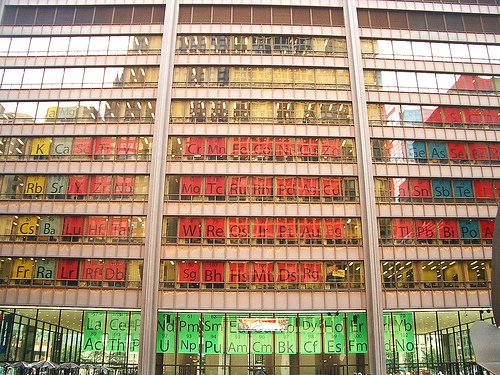 Taking a fresh look at the elements of the periodic table, a series of short films entitled “94 Elements” aims to bring these important resources out of the chemistry lab and highlight the rate at which society consuming them.

More energy and more resources are being demanded of a finite world; it is more than likely that the consequences of our actions in the past and today will have a great impact on future generations to come. Extraction of the Earth’s limited resources continues unabated or, in some developing parts of the world, with added vigour.

“94 Elements” considers our deep relationship with the elements and hopes to ask the unsettling question “what if they run out?”

Everything around us is made from the 94 elements of the periodic table, each with its own unique and valuable properties, whether as compounds or independently. For the most part, our bodies are made from just six.

Though the project may be seen as an artistic venture by some, it is, in fact, a reality check for humanity by exploring real life stories through the lens of the elements we rely so heavily upon.

Resource scarcity is not a new concept by any means, but having the consequences so vividly brought to life is perhaps more thought provoking for many.

B&GT captured the urgency of global resource usage in a recent infographic. 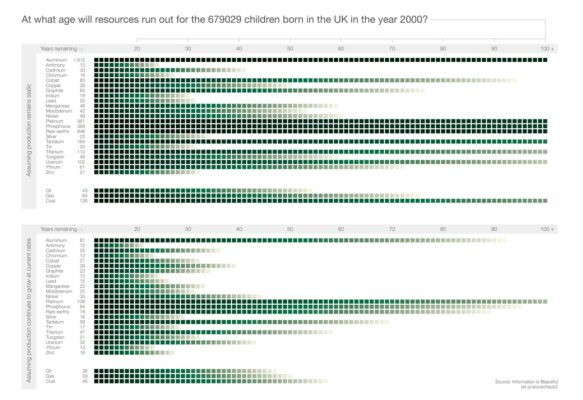 Some of the elements in the chart are becoming scarce at an alarming rate. Antimony, for example, an element that is used to make drugs and batteries, has a lifespan of less than 15 years.

Chromium, which is used to make paint, is set to last just over that, whilst tin has a best case scenario existence of just 20 more years.

94 Elements hopes to facilitate the collaboration of some of the best and newest filmmakers around with opportunities emerging for fresh talent to pitch films.

To date, four films have already been completed. “Oxygen: The Old Man and his Bed” is directed by BAFTA award winner Marc Isaacs. The website notes: “Oxygen supplementation in patients with breathing difficulties increases levels in the blood and decreases resistance to blood flow in diseased lungs, easing the workload on the heart” and tags oxygen with a market prices of $0.21/kg.

Mike Paterson directs two India-based films: “Copper: Acid and Dust”, based in Moradabad and “Germaniam: The Eye Clinic”, which is filmed in New Delhi. The website notes: “Germanium is used as a lens coating for surgical microscopes used in cataract surgery. Its optical properties help to accurately focus the different wavelengths of light passing through the lens” and gives it a market price of $1240/kg.

Sundance Festival winner Nino Kirtadze directs the fourth so far with “Gadolinium: The Scan”. Kirtadze notes: “I learned how the element Gadolinium is used to provide the contrast in the MRI images—these same images that represent such hope or despair for us as patients”.

It becomes quickly apparent that the first four films have a medical theme, and indeed, The Wellcome Trust is currently one of the proud sponsors of the project.

94 Elements is an engaging project that will become ever more so as additional elements are cinematographically captured.

A further stage of project will introduce interactive tools and visualisations around the use of natural resources, incorporating designers, coders, economists and geologists. It should prove just as fascinating.

A core message of the 94 Elements project and much of what we write in B&GT is that humanity cannot continue at its current pace. We must take stock of the global challenges that are already affecting us and change patterns of behaviour, create solutions and support those organisations and companies that are addressing the issue of sustainability as a priority.

Please, click here to visit the fundraising site for 94 Elements.