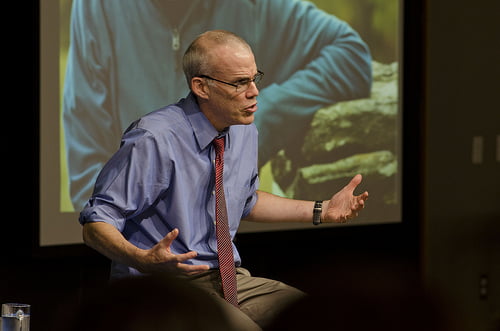 Emma Websdale spoke with prominent environmentalist Bill McKibben about why he believes divestment is the only solution when it comes to fossil fuels.

Bill McKibben recently expressed his concerns about the damaging practices undertaken by coal infrastructure projects in Australia. He described the industry as “rogue”.

Despite Australia’s pledge to reduce its greenhouse gas emissions by 80% by the middle of the century, a number of coal projects in Queensland have been given the go-ahead.

This is the case for several countries all over the world – and not just Australia.

In an attempt to prevent the burning of 2,795 gigatonnes of fossil fuels reserves – which would spout out five times more carbon dioxide than is required to stay below 2C of global warming – McKibben’s organisation, 350.org, is running a fossil fuel divestment campaign.

What made you first realise what needed to be done?

The numbers that I laid out in the Rolling Stone piece that went so viral: that the fossil fuel industry had five times the carbon in its reserves that even the most conservative governments said would be safe to burn.

What do you hope will be the outcomes of the campaign?

Speaking about fossil fuel divestment, Joe Keefe, president and CEO of PAX World Management, said earlier this year, “We are not convinced that these large multi-national companies will miss, or perhaps even notice, the small sliver of capital that is withdrawn.” What is your response to that?

We can’t bankrupt the Exxons of the world, but we can edge them closer to a kind of political bankruptcy and lessen their ability to dominate our politics.

Keefe suggested a ‘best-in-class’ approach to investment, “screening out the worst polluters while investing in companies that have made larger commitments to renewable energy“. In your mind, is this strategy effective?

It would be nice if the fossil fuel companies became energy companies, but at the moment they’re going in precisely the opposite direction.

Unlike other investment targets that old-line efforts like PAX works on, the problem here is not a flaw in the business plan (Apple pays its workers too little; we have a shareholder resolution; it gets fixed). In this case, the flaw is the business plan.