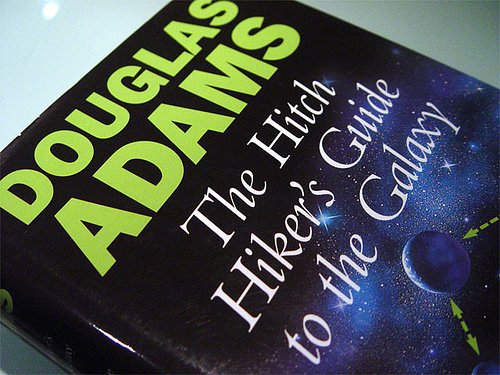 The first radio broadcast of Douglas Adams’ Hitchhiker’s Guide to the Galaxy (H2G2) was 35 years ago today.

BBC Radio 4 gave the programme a low-key launch with a 10.30pm slot. Generally positive reviews and a larger than expected radio audience established Arthur Dent, Ford Prefect and the eponymous Guide as an essential part of British culture, on radio, in books, on television and eventually on the big screen.

Blue & Green Tomorrow, in part, owes its name to the opening lines of H2G2, which describes Earth as “an utterly insignificant little blue-green planet far out in the uncharted backwaters of the unfashionable end of the western spiral arm of the galaxy“. Something about that blue-green badge lodged in a six-year-old’s brain as the ‘green’ label always seemed far too land-centric, on what is mainly a blue planet.

No-one can doubt that Adams (1952-2001) was a British genius, creating H2G2, contributing sketches to Monty Python, episodes of Doctor Who, writing the Dirk Gently novels and the Meaning of Liff (with John Lloyd of Black Adder and QI fame).

Adams was a committed environmentalist and conservationist, as all genuinely brilliant people are. His 1989 radio documentary, Last Chance to See, visited locations in the hope of encountering species on the verge of extinction.

In The Hitchhiker’s Guide to the Galaxy, Arthur Dent’s home is destroyed to build a bypass just before Earth is destroyed to create one on an hyperspatial scale. Sadly, with the overwhelming state of irresponsible investment creating a worse future, we no longer need a Vogon constructor fleet to wreck our planet. We’re doing a perfectly good job ourselves.

The Guide itself describes Earth as “harmless” which was later upgraded by Ford Prefect to “mostly harmless“. “Self-harming” may have been more apposite.

Mr Adams, you are sorely missed.

42 is the answer to life, the universe and everything