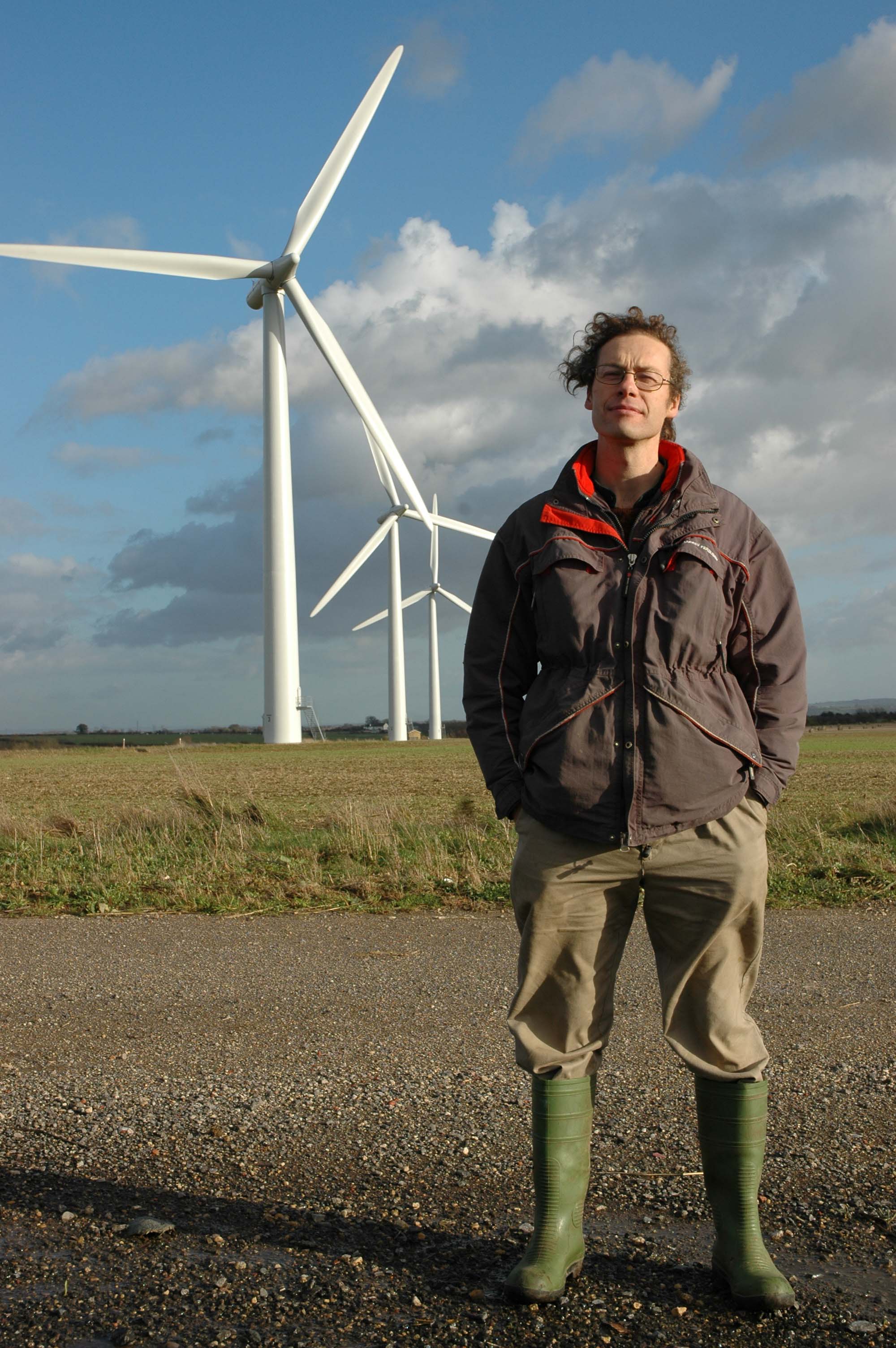 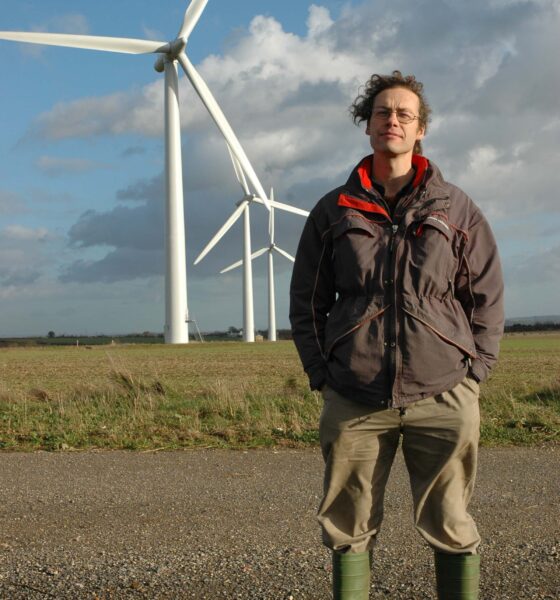 In June 2008, after a 12-year planning process, five wind turbines started spinning at Westmill Wind Farm. Owned and funded by 2,300 members, many from the surrounding community, it’s a stunning example of local sustainability. B&GT caught up with Adam Twine, the dynamic founder behind the truly inspirational project.

There are a few moments in life when one feels a true sense of pride, achievement and glory. For Adam Twine, it’ll be difficult to beat the day that five wind turbines went live at his farm near Watchfield, South Oxfordshire. They were the result of over a decade of planning battles, but more importantly, were evidence of genuine community spirit.

The five turbines, which stand in formation on a disused RAF runway in the Vale of White Horse, have 2,300 owners – each of whom shared Twine’s passion enough to invest an average of £2,000 into the development. Westmill is therefore the largest community-owned wind farm in the UK.

“I was looking at the resources on the farm and thought that farming was going to get tougher as we go forwards, so I was thinking about the resources and what I could do”, says Twine, when asked about his inspiration behind setting up the co-operative.

“I looked at how I could integrate some of the environmental campaigning into my working business, rather than just doing it on the side, and I looked at what we were doing about energy, and what I could do about it. I was lucky enough to make various connections and pressed on from there.”

If I’m going to fly any flag, it’s going to be for community ownership

And so, in the late ‘90s, he began planning Westmill Wind Farm. He was adamant that the surrounding community should be able to benefit from such a project, so founding it as a co-operative was seen as the most appropriate way forward.

“If I’m going to fly any flag, it’s going to be for community ownership”, he says, proudly.

“It’s a no-brainer to me that still a lot of people don’t get. Enabling community ownership feels like a really sound way of enabling local people, if they’re able and want to invest in it, to get their pockets back, so that all the money isn’t disappearing to shareholders around the world.

“Having the opportunity to own and generate their own electricity locally is fantastic, and being paid for it is a really good way of people engaging with the climate change debate, and getting a sense of the issues which we’re all facing and are very important.”

A video on the co-operative’s website proves just how passionate each of Westmill’s shareholders are about the project. One man, Dennis Belcher, describes his excitement in seeing the turbines being constructed, saying how he stayed up all night to watch the work being done. Another, John Willmer, talks about the “viability” of wind power, based on the vast resources available to the UK. However, the most poignant testimonial in the video comes from Derek Quinn, who said, “If my grandchildren were ever to say to me, ‘Why on Earth did you let the world get like this?’ I can say, ‘I tried’”.

The 2,300 owners of the Westmill Wind Farm Co-operative helped raise around £4.5m to fund the development. The electricity from three of the five 50m-high turbines – each of which have a generating capacity of 1.3 megawatts – is sold to Good Energy, the UK’s only 100% renewable power supplier, which supported Twine through the financing process. The electricity from the remaining two turbines goes to Co-operative Energy.

The fact that it took so long for the wind farm to actually go live, though – over 12 years in total – is a telling reminder of the notorious, and usually unjust, opposition that wind power receives.

“The fact that I was local, and the fact that it was going to be community-owned, didn’t cut any ice with anybody because it was too wacky a concept – nobody understood what that meant”, explains Twine.

“Some of the opposition we received was from people who were genuinely anxious, and that’s entirely reasonable. Some people do find turbines aesthetically hideous or certainly very disturbing and out of place, and that’s reasonable enough, too. You’re never going to change those attitudes. The stuff which is more complicated is the arguments that say the turbines weren’t very well financed, and although the political machinations were very keen that we pressed on through local planning rather than took it out to appeal, but we kept it in there and in the end, although it bounced around in lots of different directions, it came through.”

The people in opposition of the development, though, Twine says, were certainly in the minority.

“We did a lot of work on local response and the acceptability”, he states.

“My experience is that most people in principle are in favour of renewables and most people when it comes down to it being in their backyard, are actually OK with it. They might have reservations, and they might be swayed by some of the arguments going around, but in the end, most people think that it’s alright and that they’ve got bigger things in their life to worry about.”

With the Westmill Wind Farm having been in operation for four years now, Twine has set his sights on another similar project – this time focused on solar power. The Westmill Solar Co-operative share offer was launched on June 23 this year, and could become the largest community-owned solar power station in the world once it is able to raise the £4m equity needed to purchase it.

Most people in principle are in favour of renewables and most people when it comes down to it being in their backyard, are actually OK with it

Like the wind co-op, individuals can invest from £250 to £20,000 in the project, which will be funded by a 25-year feed-in tariff contract from the government. Westmill predicts the average return over the 24-year investment period to be 11% a year. A total of 21,000 panels have been installed at the site, beside the wind turbines, and the farm will produce 4.8 gigawatt hours of power every year – enough to provide electricity to 1,400 local homes.

“The exciting bit about is as far as I can see”, Twine begins, “is that solar is generally less contentious than wind.

“We will be the only solar farm in the UK that is doing community ownership at this moment in time. Hopefully there will be more – I really hope so. We’ve got the successful Westmill Wind Farm model now, so people can see what it is, can see it works, and that it does what it set out to do. I really hope that we’re going to get a much more significant amount of immediately local ownership. I think it’s a really exciting opportunity The share offer closes on July 31, and if it’s oversubscribed, priority will be given to local members.”

The Westmill Solar Co-operative began as a concept two years ago. After applying for planning permission in December 2010, consent was given three months later in March. Construction of the wind farm began in May last year. Whilst trying to source funding for the co-op, the developers, Low-Carbon Solar and the Westmill board came into contact with Cheshire-based company, Blue Energy, which had been hoping to do a rooftop industrial large-scale project, but hadn’t managed to secure any planning permission. Realising that each had something that the other one needed, Low-Carbon Solar and Blue Energy shook hands and the panels were swiftly installed, with a call option put in place for Westmill Solar Co-operative to purchase it back if it could raise sufficient capital within the year.

Westmill’s two community-owned renewable energy projects are proof that communities can do incredible things towards the UK achieving its various climate change targets. We have arguably the most plentiful wind resources in Europe, yet we’re not even close to becoming the European leader in the technology. Community-led projects like Westmill are vital in ensuring this isn’t the case.

“There’s clearly the climate change argument, and also energy security”, concludes Twine, when asked why renewable energy is so important.

“And then I guess I’d say not just renewables, but a community-owned project is an important and exciting opportunity that we should all be getting to grips with. A couple of weeks ago, for two days, over 50% of the whole of Germany’s electricity was supplied by solar PV. Most of it is from peoples’ roofs, not even from large solar farms. It is owned, it is embedded, it is decentralised, and it’s just a different and exciting model going into the 21st century.”