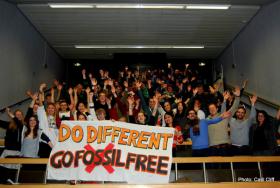 Whilst UK universities have made commitments to be more sustainable, collectively they invest over £5 billion annually in the fossil fuel industry. This creates a conflict of interest and highlights why it is high time they divested from the climate change-contributing sector.

February 14, as well as being Valentine’s Day, is Fossil Free Friday. The day forms part of student group People & Planet’s Go Green Week campaign, in which students, staff and the general public are urged to call on colleges, universities and politicians to dump the fossil fuel industry.

People & Planet’s university league table demonstrates that academic institutions are still failing to make the connection between their investments and the impacts of climate change. While all universities assessed in 2013 had an environmental policy, only eight of the 143 scored top marks for ethical investment. In contrast, ethical investment policies were “awful” at 62 institutions.

The University of Reading, for instance, was given a First Class award and ranked 17th overall, scoring highly on environmental policy, environmental management staff, Fairtrade and ethical procurement, and sustainable food. Despite this, the university doesn’t have a publicly available ethical investment policy and fails to provide ongoing opportunities for stakeholders to engage with ethical options. The league table also highlighted the fact that the university has not taken action, such as divesting or engaging with companies as a shareholder, based on ethical grounds.

Fossil Fuel Friday aims to convince UK universities that they need to take decisive action to tackle climate change and be part of the solution.

Louise Hazan, climate change campaign manager at People & Planet, says, “This year’s Go Green Week has rallied more students that ever around the urgent message that tackling climate change is more then changing our own behaviour. [It] has focussed minds on the real culprits fuelling the climate crisis and exposed the way our institutions’ investments in the fossil fuel industry contradict their public commitments to sustainability.”

Ahead of the campaign, Glasgow University formed an advisory committee to consider the case for fossil fuel divestment by April 2014. The move is evidence that students can make a difference to investment policies. Over 1,000 signatures supporting fossil fuel divestment were collected from students, staff and alumni.

Hazan adds, “Our universities can make a powerful statement by withdrawing the £5.2 billion they currently invest in this rogue industry. Not only will it send a powerful message to other institutional investors, but it’s also the only way that Universities UK can avoid losing any claim to leadership in the urgent fight against climate change.”

So far, 14 student unions have passed motions in support of fossil fuel divestment. Surveys suggest the majority on campuses across the UK support the idea. When questioned, 65% of students at Warwick University said they supported the fossil free campaign, compared with the 25% that voted against.

Once universities address their sustainable and ethical investment policies, perhaps a next step could be for them to look at their research programmes and partnerships with some of the biggest oil and gas companies in the world.

A Norwegian university recently questioned the ethics of research into the oil and gas industry. Peter Haugan, a professor at the Geophysical Institute at the University of Bergen, argued that this was conflicting with the ethical requirements of the institution to contribute to sustainable development. His comments raise questions about the impact universities can directly and indirectly have on the environment and society – and their responsibility to ensure it is a positive and sustainable one.

Many universities have used Go Green Week to make Fairtrade smoothies and encourage cycling around the local area. This is all good and important. But the real difference will be made in the way they invest. Putting their money in a sector that threatens the future, like fossil fuels – when their core mission is to create brighter opportunities for young people through education – seems misguided at best.