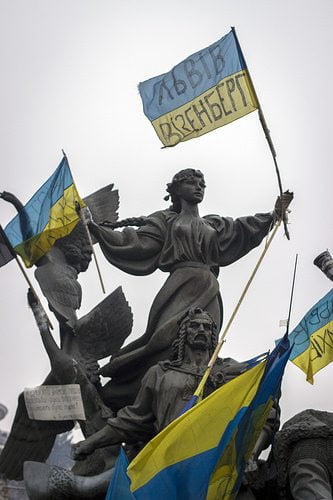 Share prices fell as the Russian stock market opened its doors on Monday, according to local media. The slump comes amid escalating tensions around the Ukraine.

The Moscow Interbank Currency Exchange (MICEX) was down 5%, whilst the RTS index saw a fall of 4.8%, according to reports from Voice of Russia. Prices for most benchmark shares on the Moscow Exchange (MOEX) were also down by as much as 10.3%.

The Ukraine crisis started in November 2013 with a series of demonstrations after president Viktor Yanukovych refused to sign an association agreement with the EU, saying it would be disadvantageous to the country. These demonstrations have since escalated, with violence intensifying in mid-January and calls for the resignation of Yanukovych and his government.

Following the violent protests, the president was deemed unable to fulfil his duties and an election has been set for May 25.  Over the weekend, Russian president Vladimir Putin’s request to deploy Russian troops in Ukraine was approved. In response, Ukraine has ordered the mobilisation of its army, signalling the rising threat of military confrontation.

Russia has since taken de facto control of the Crimea region, with thousands of troops securing the area, despite international calls for withdrawal.

The move prompted the G7 nations – the US, UK, Canada, France, Germany, Italy and Japan – to release a joint statement. The statement says the countries “condemn the Russian Federation’s clear violation of the sovereignty and territorial integrity of Ukraine”. As a result of the tensions, the participation in activities associated with the preparation of the scheduled G8 summit in June have been suspended.

Speaking to the BBC, William Hague, UK foreign secretary, has said “there is no justification” for Russia’s action adding that he was “very concerned” about the possibility of Russia moving into other areas of Ukraine.