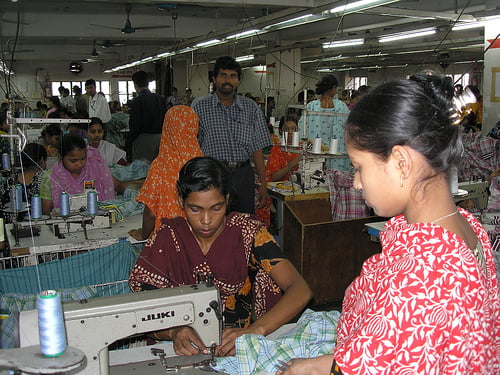 The recent collapse of a factory in Bangladesh poses serious questions about safety and working conditions of clothes manufacturers, and also emphasises the role of consumers and buyers in western societies.

More than 300 people are believed to have died in the collapse, with rescuers still searching for over 900 people trapped under the ruins of the building near Dhaka.

Many workers were employed in the Rana Plaza by a local textiles enterprise, which supplied products for multinational companies. Its owner has been arrested for having ignored safety warnings over the poor state of the building.

People in London gathered outside Primark at the weekend, as it turned out that the clothing retailer, often criticised in the past for issues relating to its supply chain, had one of its suppliers on the second floor of the factory. Protesters claimed the firm is somewhat culpable for the events in Bangladesh after failing to identify the risks.

The charity War on Want, which fights global poverty and featured in Blue & Green Tomorrow’s Guide to Ethical Shopping 2012, reported in 2006 that despite many pledges from companies in the region, workers in Bangladesh were still being exploited.

“The disaster in Bangladesh is a tragedy, but it is not an accident”, said War on Want sweatshops activist Murray Worthy.

“If UK high street chains like Primark had put in place proper measures to ensure the workers who make their clothes are safe, these deaths could have been avoided.”

Senior programmes officer, Laia Blanch, added, “Multinational corporations, factory owners and the Bangladeshi government have once again failed to ensure that the health and safety of garment workers are at the forefront of the country’s main export sector.”

Primark is a subsidiary of ABF food processing company, which was given a low ethical score in Oxfam’s Behind the Brands study in February. According to the BBC, Primark said it would work with other retailers to review safety standards.

Carmel Giblin, CEO the Supplier Ethical Data Exchange (Sedex), which helps companies to manage ethical supply chain risk, said, “Examples of best practice do exist in Bangladesh and we encourage brands and their suppliers to pay close attention to these and to address risks before they turn into tragedies”.