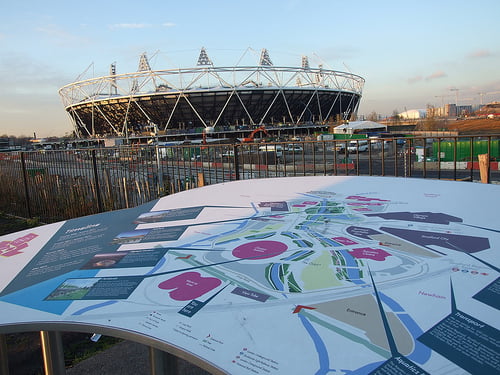 A recent report by WWF-UK and BioRegional confirmed that the London 2012 Olympic Games are set to be the most sustainable in history. But Alex Blackburne argues that this claim is the equivalent of boasting the least harmful nuclear bomb. Unless, that is, things change dramatically.

3.4m tonnes: the amount of carbon dioxide equivalents that, two years ago, the London 2012 organisers estimated would be emitted because of the Games.

In August last year, plans to offset these emissions were scrapped, after the London Organising Committee of the Olympic and Paralympic Games (LOCOG) expressed reservations over official requirements to locate such offsetting projects abroad.

The real debate, however, lies with some of the dubious sponsorship deals the Games has sealed; the most laughable of which is oil giant BP’s role as official sustainability partner.

Anyone with an ounce of sense would look at this affiliation and question its integrity. This is a company that in 2010 was responsible for one of the most costly and avoidable environmental disasters in history, when an explosion occurred at its Deepwater Horizon rig in the Gulf of Mexico, causing 20m gallons of oil to leak into the sea.

It’s difficult to comprehend just how bizarrely inappropriate the collaboration is. But that’s not all.

Mining firm Rio Tinto is supplying the metal for the medals, and another sponsor is Dow Chemical, the organisation that owns Union Carbride – which is 1984 was responsible for the Bhopal gas disaster in India, which, to date, has allegedly been responsible for the death of 25,000 people.

The pair, along with BP, have been the subject of a three-month campaign called Greenwash Gold, set up by the London Mining Network, the Bhopal Medical Appeal and the UK Tar Sands Network, the results of which can be seen in the video below.

Despite this, though, a report by WWF-UK and BioRegional confirmed that the 2012 Games are set to be the most sustainable Olympics in history.

However the study, called Towards a One Planet Olympics Revisited, does pick out a number of gaps in the event’s sustainability plan, particularly related to its renewable energy pledges.

LOCOG had hoped to have sourced 20% of the energy needed to stage the games from clean sources, but it was revealed that these challenges won’t be met; meaning only 9% of on-site energy will be renewable. This compares to almost 10% of UK energy generated from renewable means – so not much better than the average UK household – not exactly “Faster, higher, stronger”; the Olympic Games’ motto.

The biggest hiccup in LOCOG’s sustainable energy plan was its failure to install a wind turbine at the Olympic Park, because of health and safety fears.

The WWF-UK and BioRegional report concludes, “London 2012 missed a core opportunity to demonstrate leadership, has failed to lay the foundations of a renewable energy legacy for the Olympic Park developments and sent out a negative signal to the market about onshore wind turbines in urban locations.”

Perhaps the most shocking fact to emerge from the sponsorship side, and one that has received little coverage, is the fact that the Games could actually be carbon neutral with a little help from one of its sponsors, ArcelorMittal.

The steelmaker is behind the Orbit, a 114.5 metres, 2,000 tonne, steel structure that doubles up as a piece of art and an observation tower. But the company’s contribution to the event could be even greater.

“For ArcelorMittal, a carbon neutral London 2012 would be a far better Olympic legacy than the Orbit could ever be”, explained Sandbag policy officer Rob Elsworth.

“…it could achieve this effortlessly by cancelling less than 3% of the spare carbon allowances that European governments awarded them for free.

“Such a gesture would also help reduce the supply of allowances in the EU emissions trading scheme at a time when it is struggling to remain relevant.”

It remains to be seen whether the organisation will act upon the calls.

To conclude, we want to make it clear that Blue & Green Tomorrow is not part of anti-Olympics bandwagon. That’s a position for the cynical or sceptical. The Olympic ideals are noble ones.

However, if the UK wants to really push for a sustainable economy led by the “greenest government ever”, we’re going about hosting the Olympic Games this year – arguably the world’s biggest event – in completely the wrong way, by making dubious corporate affiliations and not making more of an effort to reduce its waste and pollution.