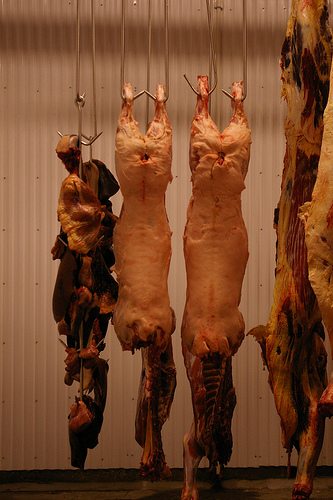 Meat inspectors have warned that changes wanted by the European Commission might cause sick animals to enter the food chain.

Inspectors that have to ensure that meat consumed in the UK is suitable for consumption have claimed that changes in legislation, asked by the European Union and backed by the government, could mean more infected food would enter the food chain.

Over the last years, inspectors have prevented millions of animals carrying tapeworm, pneumonia, abscesses, septicaemia, peritonitis and tumours, as well as faeces-contaminated meat, from entering the market.

Despite controls, hundreds of thousands of cases of campylobacter infections – one of the most common meat bacteria – are recorded each year, with some resulting in death.

Under the new regulation, officials would reduce the time and quality of inspections and delegate some work to food companies, which came under scrutiny during last year’s horsemeat scandal.

Shadow food minister Huw Irranca-Davies said, “The government need to explain why they are seeking to weaken consumer protection and the wholesomeness of produce, barely a year after the horsemeat scandal.

“British consumers will be appalled at any risk of tapeworm, parasitic lungworms and diseased parts of animals ending up on their dinner plates at home, or in hospitals and schools.”

However, European and British authorities have said that the new regulation would result in more effective controls for consumer safety, as they say that many diseases found are not dangerous for humans.

Meanwhile, the European Food Safety Authority (EFSA) has invited scientific experts in various areas – like GMOs, animal health and welfare, plant protection, contaminants in the food chain, biological hazards and nutrition – to join its scientific panels that would then advise EU decision-makers.