On this day in 1985: French government blows up Greenpeace’s Rainbow Warrior

The boat – named after a North American Indian prophecy – was built in 1955, initially serving as a fishing trawler in the North Sea. It was later launched as the Rainbow Warrior in 1978 and was due to lead a flotilla of boats to Mururoa Atoll in the Pacific to protest against French nuclear tests before the assault occurred.

According to Greenpeace, “It was an instance when a government chose to respond to peaceful protest with deadly force.”

The incident saw the death of Fernando Pereira, a Portugal-born Greenpeace photographer. He had joined the Rainbow Warrior crew in order to document the French nuclear testing and bring his camera skills to a mass audience. The French government has never officially apologised to his family.

Dominique Prieur and Alain Mafart, two French agents who had posed as Swiss tourists in order to carry out the attack, were caught and detained by New Zealand authorities. Charged with manslaughter, they were sentenced to 10 years in jail.

They only served two years of the sentence after the French government intervened, threatening to impose trade embargoes with New Zealand. Prieur and Mafart spent the majority of their sentences in France, as part of an agreement between the French and New Zealand governments and Greenpeace. One commentator described the act and subsequent political events as “state sponsored terrorism”.

On the 25-year anniversary of the attack in 2010, Nine News reported that French agents might have been spying on the ship’s layout, with the two bombs seemingly causing devastating damage in unusually quick time. Indeed, the Rainbow Warrior sank just four minutes after the second bomb was detonated.

Some even accused the Australian government and forces of contributing to the impact of the attack, with the authorities detaining other French agents for only 24 hours before being released.

Greenpeace replaced its lost vessel with a new ship, and for 22 years, the second Rainbow Warrior assisted in the institution’s campaign against nuclear testing. The campaign group said, “In 2011, the new Rainbow Warrior – the world’s first purpose-built environmental campaigning ship – readied herself to carry on the original Rainbow Warrior’s spirit.”

The man in charge of the French intelligence service at the time of the Rainbow Warrior sinking 28 years ago said the late François Mitterrand, the French president at the time, had personally given the operation the go-ahead. In extracts from the 23-page document published by Le Monde, Admiral Pierre Lacoste, who headed France’s Direction Generale de la Securite Exterieure (DGSE) describes a meeting with Mitterrand on May 15, 1985, two months before the attack.

“I asked the president if he gave me permission to put the neutralisation plan into action”, he wrote.

“He gave me his agreement while stressing the importance he placed on the nuclear tests. I did not go into greater detail on the plan, as the authorisation was explicit enough.”

Lacoste remained adamant he would not have launched such an operation without the personal authorisation of the president.

Greenpeace has long been an opponent of French nuclear testing in the South Pacific. In 2002, Greenpeace activists sought revenge for the Rainbow Warrior event by attacking a French challenger. The 25-metre yacht, owned by the Defi Areva team, was scheduled to compete in the Louis Vuitton Cup, the challengers’ series for the America’s Cup, before a motor-powered dinghy crashed into it.

Ironically, were Defi Areva to have won the competition, they would have taken on Team New Zealand for the America’s Cup in February 2003. 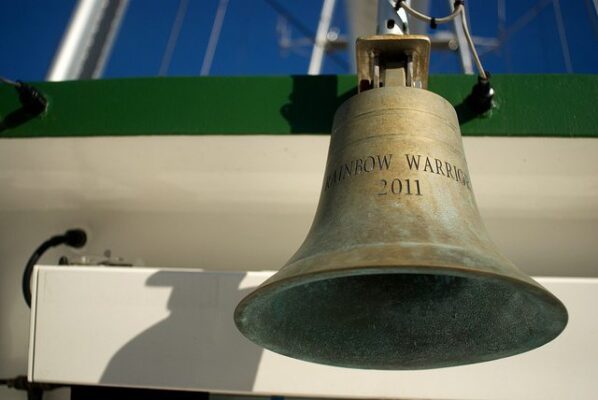 Although the incident remains a tragic memory, there were several positive outcomes for green activism and idealism. The ship’s sinking was a huge propaganda victory for green institutions and followers everywhere. This, along with the panic unleashed by the catastrophe at Chernobyl in 1986, saw Greenpeace’s membership triple, whilst environmental concerns saw broader and prioritised recognition from many governments across the world.

After the bombing in Auckland harbor, the ship was given a resting place at Matauri Bay in New Zealand’s Cavalli Islands, where it has become a living reef, attracting marine life and recreational divers.

The scandal led to the resignation of Charles Hernu, the French defence minister, and Lacoste’s departure from the DGSE. To this day, it tarnishes France’s image in the South Pacific and is considered the DGSE’s worst post-war failure.

Along with the resignations and embarrassment to the French government and military, reputations have long since struggled to be resurrected.