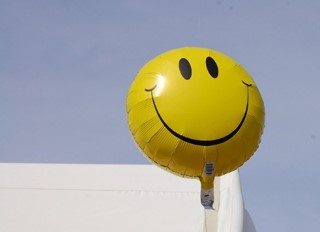 Reported personal well-being has been improving every year since 2012, when the Office of National Statistics started to collect the data across four measures: life satisfaction, worthwhile, happiness and anxiety.

165,000 people are interviewed each year to compile the well-being statistics. Comparing the average ratings for the financial year ending 2015 with the previous year for each of the four measures of personal well-being:

The year-on-year differences are small but statistically significant in each case. The proportion of people giving the highest ratings (scores of 9 or 10 out of 10 for life satisfaction, worthwhile and happiness, and 0 to 1 out of 10 for anxiety) for each measure of personal well-being also increased significantly in the financial year ending 2015.

Additionally, the proportions of people reporting personal well-being at the lowest levels (scores of 0 to 4 for life satisfaction, worthwhile and happiness and ratings of 6 to 10 for anxiety) reduced, although the decreases in low well-being were small compared with the improvements in the highest ratings.