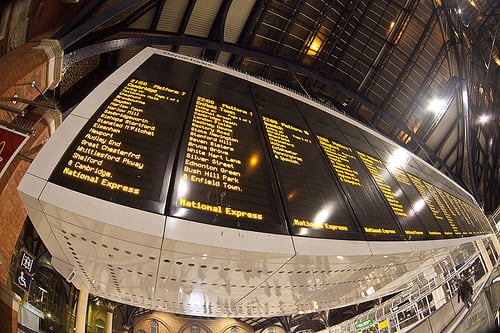 Network Rail is set to invest £37.5 billion into Britain’s rail infrastructure, promising to speed up journeys, make more seats available to commuters and lower emissions over the next five years.

The organisation’s strategic business plan, which is currently being reviewed by the Office of Rail Regulation, looks to reduce costs for the consumer and make the industry more sustainable between now and 2019.

Carbon emissions are set to be cut by 37% per passenger – the equivalent, Network Rail says, of taking 1m lorries off of Britain’s roads. Meanwhile, it’s expected that hundreds of miles worth of electrified railway will be installed in the coming years.

“As our railway gets busier the challenges get bigger and more complex”, said David Higgins, Network Rail chief executive.

“We have entered an era of trade-offs. Increasingly we have to balance the need to build more infrastructure, run trains on time and cut costs, and in many areas choices will need to be made.”

The cost reduction and efficiency improvement plans from Network Rail come at a time when season ticket holders are facing a 4.2% increase in rail fares – a move that critics have deemed unsustainable.

This year is the 50th anniversary of the Beeching report, published in 1963, in which British Railways chairman Richard Beeching outlined plans for the restructuring of Britain’s railways.