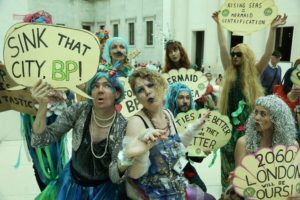 Theatrical protest group BP or not BP? will lead over 200 people in an unsanctioned mass performance inside the British Museum’s Great Court this Sunday. In response to BP’s painfully ironic sponsorship of the museum’s current ‘Sunken Cities’ exhibition, it will feature singing mermaids, hundreds of people physically representing the ocean, and some very big surprises that will not be revealed until the day.

The performance has been publicly announced in advance, but the group believe they will still be able to pull off the ocean-themed flashmob, or ‘splashmob’, inside the building despite not having permission from the museum. The group have already targeted the ‘Sunken Cities’ exhibition three times, including with a troupe of singing merfolk in July.

BP or not BP? – who have performed without permission 18 times in the British Museum over the past four years – plan to bring the Great Court to a standstill with perhaps their most ambitious piece of creative protest to date. This is their response to the museum’s decision, in late July, to renew its sponsorship deal with BP for another five years. The group will demand that the unpopular new deal – set to start in 2018 – must be dropped, and say they will continue to escalate protests until it is.

Scientists tell us we need to leave most of these fuels in the ground to have any chance of avoiding runaway climate change.

Danny Chivers, who will take part in the performance, said:

“A ‘Sunken Cities’ exhibition sponsored by BP is almost beyond parody. This company is actively lobbying against climate legislation, blocking clean energy and pushing to drill in ever riskier places for ever dirtier forms of fossil fuel, from tar sands to deep offshore rigs to the Arctic. But scientists tell us we need to leave most of these fuels in the ground to have any chance of avoiding runaway climate change, including sea level rises that would threaten dozens of the world’s biggest cities within our lifetimes.