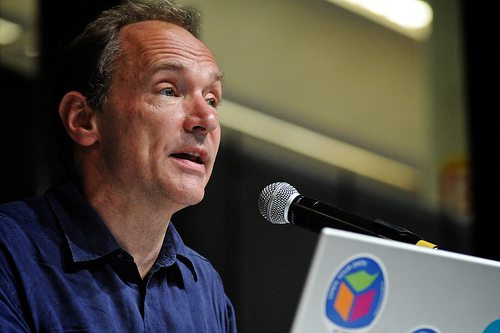 The internet at 25: creator Tim Berners-Lee says it needs its own ‘Magna Carta’

Twenty-five years to the day since he first drafted his idea, the inventor of the world wide web has called for a bill of rights to protect its users.

In 1989, while working as a software engineer at CERN, Sir Tim Berners-Lee wrote his initial proposal for the world wide web.

On Wednesday, he warned that the internet had come increasingly under government control, and urged people to protest against surveillance and secure the web’s future as a “neutral” medium.

“It’s time for us to make a big communal decision. In front of us are two roads – which way are we going to go?”, he told BBC Breakfast.

His plans for such a constitution are to be taken forward by the Web We Want campaign, which has been launched by Berners-Lee’s World Wide Web Foundation.

The initiative is calling for citizens to rally together and draft an Internet Users Bill of Rights, either for their area or for everywhere.

Berners-Lee has been an outspoken critic of the American and British governments’ efforts to monitor citizens’ activities on the web since they were revealed by whistleblower Edward Snowden.

In November, he said that GCHQ and the National Security Agency (NSA) had severely weakened the online security that hundreds of millions of internet users rely on for data privacy.