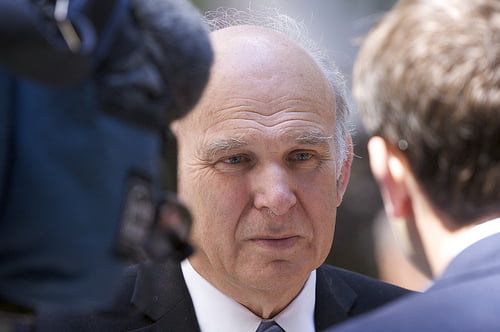 Cable announced that an £8m energy-from-waste project and a £5m energy saving scheme will be financed by the GIB, which has £3 billion of government funding to hand out to the green economy.

The bank received EU go-ahead in October and speaking at its headquarters in Edinburgh today, Cable said, “It will place the green economy at the heart of our recovery and position the UK in the forefront of the drive to develop clean energy.”

He added, “£3 billion pounds of government money will leverage private sector capital to fund projects in priority sectors from offshore wind to waste and non-domestic energy efficiency, helping to deliver our commitment to create jobs and growth right across the UK.

“Having the headquarters in Edinburgh is a powerful vote of confidence in the union, and a testimony to our commitment to helping Scotland lead the green revolution.”

Cable was joined at the opening of the GIB by its chair Lord Smith and chief executive Shaun Kingsbury, who was appointed in September. Energy secretary Ed Davey, energy minister Greg Barker and Scotland secretary Michael Moore were among those also in attendance.

Davey said, “The Green Investment Bank will help attract the capital required to allow the green economy to blossom, encouraging investors to market and kick-starting low-carbon and energy efficiency projects.

“In combination with our electricity market reforms, there will be lasting economic benefit as a result, with new expertise and jobs created, that will give the UK a competitive edge.”

Questions have been raised about the GIB’s role, given that it won’t be able to borrow for much of its early existence, but its opening has been largely welcomed by the green economy.

“Today is a significant milestone and we commend the government for quickly launching this important, first-of-a-kind institution”, said Ben Caldecott, head of policy at Climate Change Capital, one of the first organisations to explicitly call for a GIB.

“The immediate priority for the GIB is clear: catalysing institutional investor investment into offshore wind and domestic energy efficiency by helping the market structure and issue green asset-backed bonds.

“Over time there will be many other opportunities for the GIB to spur investment into the modernisation of the UK energy system, but in the near-term it must focus on what’s possible given its relatively small £3 billion capitalisation. It must also align its work closely with other government initiatives, such as the £50 billion UK Infrastructure Guarantee Scheme.

“Much could still go wrong, not least government reneging on its promise to give the GIB borrowing powers. But we remain confident that this will be an enduring institution, able to have significant impact and working in the national interest over many years to come.”