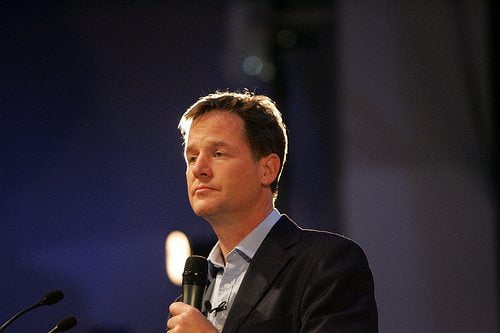 Deputy prime minister Nick Clegg has warned that a consensus on green issues among the main political parties is at risk of “falling away”, in a speech in London on Thursday. He added that clarity was vital for securing investment in the sector.

The Lib Dem leader said, “Given the nature of investments, we need to give low-carbon firms as much clarity and certainty as possible.” He went on to say that green issues falling down the policy list had come “at the worst possible time”, adding, “If there was ever a time to sharpen our focus on green energy commitments, it’s now.”

The recent energy price hikes were also mentioned. Clegg commented, “Labour’s promise to temporarily freeze energy bills – as well as being a con, with energy companies bound to hike up prices both before and after – would also be a huge blow to our renewables sector, spooking investors and threatening billions of pounds worth of investment in green energy.”

The renewables industry recently warned that the government was risking discouraging investors with lack of clarity.

The WWF’s chief executive David Nussbaum supported Clegg’s comments. He said, “Green is not an alternative to growth, it is a vehicle for growth.

“This growth can continue, if our political leaders create a supportive environment for long-term green investment.”

Clegg also argued that the economy needs to focus on prosperity tomorrow, “driven by responsible business and sustainable growth”, rather than quick profits today.

He argued that the green agenda will require leadership on three fronts: aggressively countering the myth that if you are for the environment then you are against the consumer; ensuring that as the economy recovers we make the low carbon industry a cornerstone of the new economy; and a renewed focus on the natural environment.

The UK Green Building Council (UKGBC) responded to the speech by calling on Clegg to stand firm against any attempts to cut green levies from energy bills.

Rising energy prices prompted David Cameron to announce a review into ‘green levies’. Ed Davey has since confirmed that renewable policies are not at risk in the review [http://blueandgreentomorrow.com/features/the-green-levies-review-when-is-investor-reassurance-not-reassuring/].

UKGBC chief executive Paul King said, “Poor planning by the government has already led to a massive drop in energy efficiency installations in our most vulnerable homes, and 7000 jobs have been lost.

“To scale back or fundamentally change track on ECO now will devastate the only industry that can guarantee immediate and permanent reductions in people’s energy bills.”