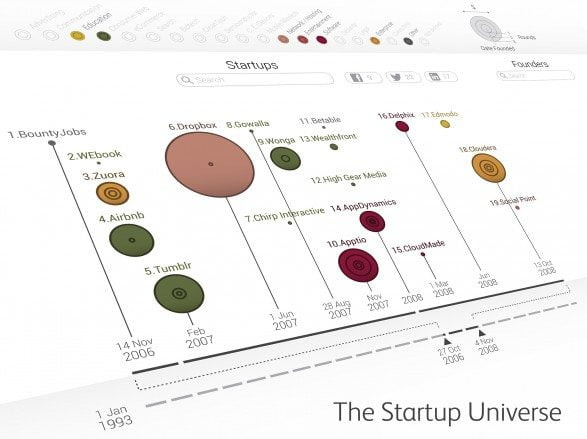 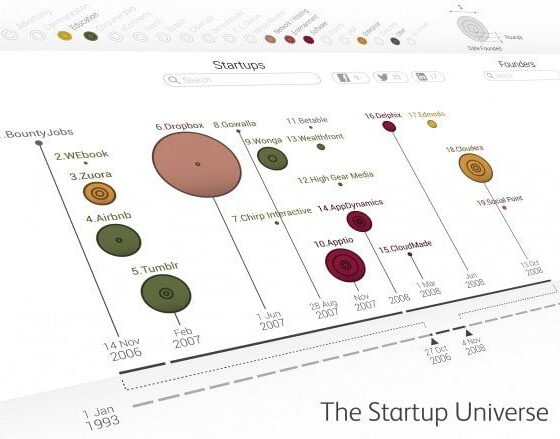 The Startup Universe: an infographic analysis of cleantech

A new infographic, co-designed by a Blue & Green Tomorrow contributor, has been shortlisted in the 2013 Information is Beautiful Awards for data visualisation.

The Startup Universe depicts explores the relationships between startup companies and their founders and investors, also known as venture capitalists, since 1990. With over 25,000 startups spread across 20 countries, there are numerous paths the reader can take on their journey of discovery.

Sectors included in the infographic include advertising, biotech, software, communication and education. The burgeoning and relatively young industry of clean technology was also showcased.

“While wandering through the cleantech section, I was encouraged to see the US Department of Energy actively investing in this category”, said Ben Willers, one of the designers of the infographic, who also contributes to Blue & Green Tomorrow.

“One of the startups I instantly recognised was Tesla Motors, a manufacturer of high-performance electric sports cars.

“Investigating further I spotted the name of an investor I was familiar with. Elon Musk, co-founder of PayPal, appears to be a big supporter of cleantech, having participated in the first five rounds of funding for Tesla, and also being an early supporter of solar energy provider SolarCity.”

Click on the image above to view the infographic. Explore more infographics like this one on the web’s largest information design community, Visually.

For the full shortlist of nominated infographics, as voted for by the public, see here. The event organisers are combining the public votes with those of its official judges, and the winners will be announced at our London event on November 20.

Some of Ben’s previous infographics for B&GT:

The World of CO2

Renewable energy employment in the UK