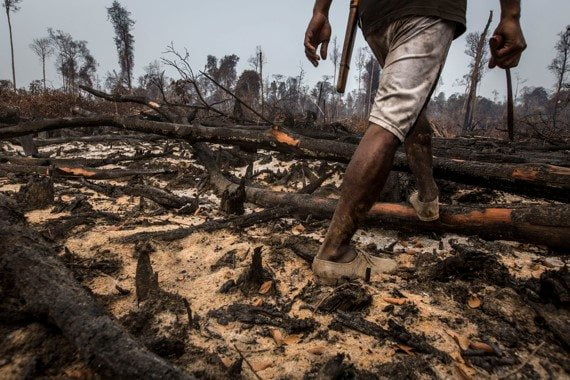 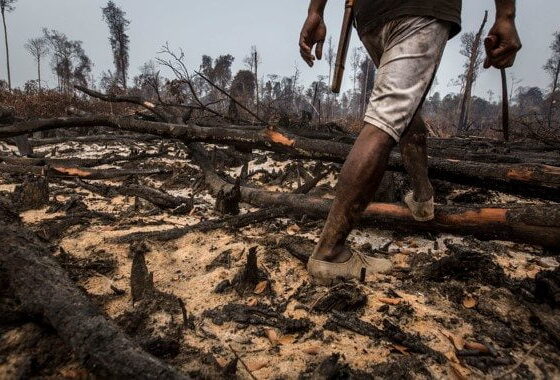 In July and August 2015, fires were widespread across Tesso Nilo National Park in Riau, Sumatra – an area of vital tiger habitat that has been devastated by illegal encroachment including palm oil development. Fires have also been reported around Tanjung Puting National Park in Central Kalimantan.

Greenpeace’s Indonesian Forest Project Leader Bustar Maitar said: “As governments prepare to meet in Paris to save the world from catastrophic warming, the earth in Indonesia is already on fire. Companies destroying forests and draining peatland have made Indonesia’s landscape into a huge carbon bomb, and the drought has given it a thousand fuses. The Indonesian government can no longer turn a blind eye to this destruction when half of Asia is living with the consequences.”

Indonesian forest fires pose a huge threat to health across Southeast Asia, and are estimated to result in 110,000 deaths each year from respiratory and other illnesses. They are also a significant source of greenhouse gas emissions that threaten the world’s climate.

The Indonesian government’s own data show that deforestation and peatland destruction are responsible for nearly two-thirds of Indonesia’s GHG emissions. Severe peatland and forest fires in Indonesia in the el Nino year of 1997 produced carbon emissions estimated to be equivalent to up to 40% of global fossil fuel emissions. 2015 is forecast to be the biggest el Nino year since 1997.

Maitar added: “These fires are a harsh reminder of the pulp and palm oil industry’s legacy of destruction. Companies need to rise to the challenge and work together to break the link between commodity production and forest destruction. Unilateral no-deforestation policies are not working. Companies must eliminate the economic incentive to trash forests with an industry-wide ban on trade with anyone that clears forest.”

Deforestation rates have increased dramatically between 2010 and 2013 despite the introduction of a 2011 moratorium on new permits to clear primary forest or peatland. In recent years, many companies that produce, trade or use palm oil and other commodities from Indonesia have pledged to take action on forest destruction. Yet deforestation indicators provided by the World Resources Institute strongly suggest the upward trend is continuing.