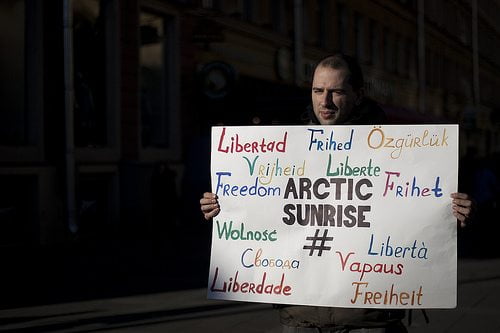 Russian authorities have dropped charges of piracy against 28 Greenpeace activists and two journalists, and have accused them of hooliganism instead, according to officials.

The ‘Arctic 30’ have been detained in Murmansk for over a month, after their arrest by Russian security forces during a protest at the Prirazlomnaya oil rig, an offshore Arctic drilling platform operated by the Russian energy giant Gazprom.

All 30 had originally been charged with piracy, an accusation which carries a maximum 15-year sentence in Russia, despite President Putin saying that the activists were clearly “not pirates”, and Vladimir Lukin, Putin’s human rights ombudsman, arguing there was “absolutely no basis” for the piracy charges.

Vladimir Markin, the head of Russia’s investigative committee, told Russian news agencies that the charges have now been reclassified. The new charge has a maximum penalty of seven years.

Vladimir Chuprov of Greenpeace Russia says that the campaign group will continue to fight the accusations.

“We will contest the trumped up charge of hooliganism as strongly as we contested the piracy allegations”, he said.

“The Arctic 30 are no more hooligans than they were pirates. This is still a wildly disproportionate charge that carries up to seven years in jail. It represents nothing less than an assault on the very principle of peaceful protest.”

A number of public figures, including 11 Nobel peace prize winners and German chancellor Angela Merkel, heaped pressure on Putin to use his position to ensure the piracy charges were dropped and the activists and journalists were released.

Over 1.5 million people from around the world have sent letters to Russian embassies demanding the activists’ release. Kumi Naidoo, the executive director of Greenpeace International, has also written directly to Putin, offering to move to Russia and act as a guarantor for the behaviour of the activists if they are released on bail.

The presidential press secretary, Dmitry Peskov, responded to say the president had no power to influence the courts.

The activists were aboard the Greenpeace ship Arctic Sunrise, protesting against Russian plans to drill for oil in the Arctic region. Ben Ayliffe, head of Greenpeace International’s Arctic oil campaign, said, “Drilling for oil here in the Arctic is a grave environmental risk that must be stopped and this is why Greenpeace International came here, taking peaceful action to defend the environment on behalf of the millions of people around the world who are opposed to drilling operations.”

The Prirazlomnaya rig will be the first offshore drilling project in the Arctic. It is due to become operational in early 2014.