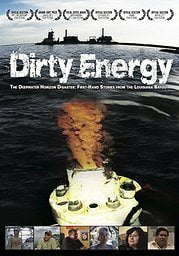 Dirty Energy tells the story of the Deepwater Horizon disaster from a personal point of view, demonstrating that in the years after the event occurred, those living in the local area continue to be affected.

On April 20 2010, the Deepwater Horizon drilling rig, which at the time was operate by BP, exploded off the Gulf of Mexico, killing 11 workers and leading to millions of barrels of oil pouring into the ocean. Since the event it has become known as one of the worst environmental disasters in history and issues around compensation are still ongoing today.

The full repercussions of the disaster, including impacts on the ecosystem and people in the local area, still remain unknown. Dirty Energy speaks to those most affected about the economic devastation and long-term health risks they are now faced with as a result of the explosion and how they plan to respond and move on.

Whilst the disaster has been well documents in the news, in terms of the ecological impact and compensation, the film demonstrates that BP has not taken the action it said it would and that its responses have been less than satisfactory for those involved.

One of the interesting points raised in the documentary is the power oil firms have within the political system and how this affects decisions. Dirty Energy is a thought-provoking film that offers an extra layer to a much covered disaster.