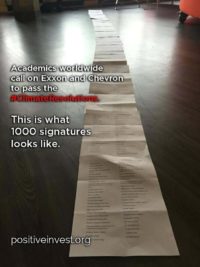 Oil companies Exxon Mobil and Chevron are being pressed into passing climate resolutions at their companies Annual General Meetings later this month. Over 1000 academics from more than 40 universities worldwide have signed an open letter on the matter.

Exxon Mobil and Chevron are being urged to pass eight climate change-related shareholder resolutions at the companies’ Annual General Meetings (AGMs) on May 25, says Positive Investment, an international coalition of students, academics, and staff concerned about ethical investment.

The letters, with all 1000 signatures, will be mailed to each of the companies’ top 20 shareholders on Thursday afternoon.

Lily Tomson, spokesperson for Positive Investment spokesperson said: “Academics clearly recognise that this is a chance to change the trajectory of two of the largest fossil fuel companies in the world. This has happened very quickly, which shows the depth of support among professors.”

The resolutions cover everything from 2°C business plans and methane leakage (which has 25 times the potency of carbon dioxide) to greenhouse gas reduction goals and lobbying disclosure.

Lily Tomson added: “We’re expecting a surge in the last few days as word continues to spread to all corners of the globe. Signatories include professors from Oxford, Cambridge, all eight Ivy League universities, and dozens of other institutions from at least twenty countries thus far.

“We’re humbled by the enthusiasm academics have shown, and we encourage everyone to push for yet more signatures in the coming days.”

High-profile endorsements include Lord Deben, Chairman of the UK’s independent Committee on Climate Change, Lord Martin Rees of the University of Cambridge, Professor Bob Eccles from the Harvard Business School, and Dr Gernot Wagner of the Harvard University Centre for the Environment, co-author of Climate Shock.

One of the companies’ top 20 shareholders, the Norwegian Sovereign Wealth Fund, recently announced its support for the portfolio resilience resolutions co-filed by the Church Commissioners for England and others.

As You Sow filed resolutions asking Exxon and Chevron to report energy resources using an energy-neutral metric that treats barrels of oil and renewables equally. The old system of reporting incentivises the companies to replace every barrel of oil or face market downgrades.